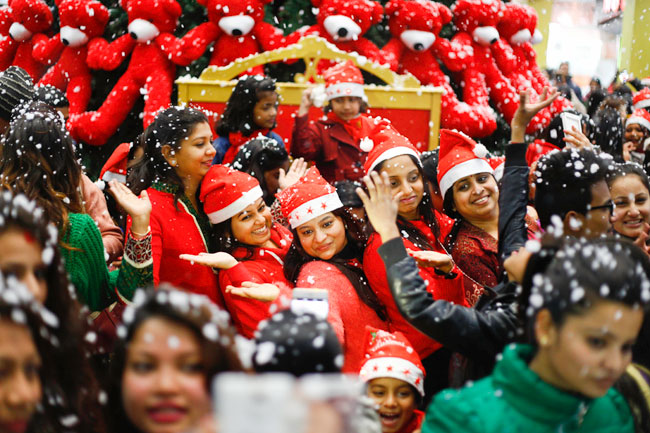 KATHMANDU, Dec 25: President Bidya Devi Bhandari has wished that Christmas, the great festival of the Christians, inspired all to build a peaceful and prosperous Nepal by promoting fraternity, love and unity among the Nepalis.

In a message given on the occasion of Christmas today, she extended hearty best wishes to all the Christian Nepalis within the country and abroad for their happiness, peace, prosperity, good health, mutual goodwill, unity, brotherhood and continued progress.

"May the Christmas give inspiration to build a prosperous Nepal in the same way we are united in celebrating this festival," the President stated in the message.

The festivals that are observed in our country, which is rich in religious and cultural diversity, have been making important contribution to maintaining social unity, harmony and religious tolerance by providing the opportunity for social and family get-together and exchanging happiness and exuberance. It is our collective responsibility to make the unity and goodwill that is fostered on such occasions sustainable and stronger, the President's message further reads.

Likewise, Prime Minister Pushpa Kamal Dahal extended best wishes on the occasion of Christmas all the Nepalis Christians in and outside of the country.

In a press statement released by Prime Minister, PM Dahal wished for the happiness, peace and prosperity of all Christian communities.

The statement further expresses the government's anticipation from the Christian community in the country for their strong support and cooperation to implement new constitution and push economic agendas.

"I would like to reiterate the fact that the government is effortful to forge national unity by establishing the identity, sense of belonging and rights of communities of all caste, communities and religion," reads the statement.

PM Dahal, in his message, has pressed for enforcing new national statute, forwarding economic agendas on the strength of the national unity among public of all territory, religion, language and culture.

Similarly, Nepali Congress president Sher Bahadur Deuba has wished for the happiness, peace and prosperity of all the Christians within the country and abroad on the occasion of Merry Christmas.

In a message on the occasion, Deuba expressed the belief that festivals strengthened the national unity when celebrated together with goodwill. He stated that the country progresses with the goodwill and mutual understanding among all the ethnic, linguistic, religious and cultural communities.

He wished that may the Christmas festival foster brotherhood and amity among all. RSS