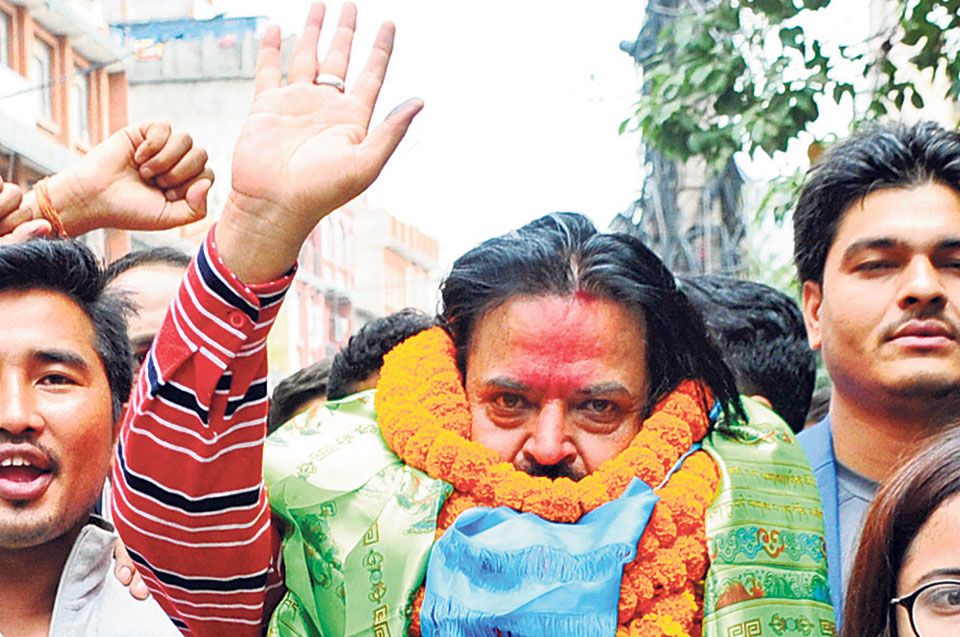 Former Maoist leader Balkrishna Dhungel waves at the media and well-wishers after being released from Dillibazar jail on Tuesday morning. He was released through a presidential pardon. Photo: Republica

KATHMANDU, May 30: The government on Tuesday released murder-convict former Maoist leader Balkrishna Dhungel from jail through a presidential pardon on the occasion of the Republic Day.

President Bidya Devi Bhandari granted pardon to 816 prisoners serving their terms in various prisons across the country including Dhungel based on the recommendation of the government as per Article 276 of the constitution on the 11th Republic Day, according to a press statement issued by the Office of President.

Dhungel, who was serving a 20-year jail term after being convicted of killing Ujjan Kumar Shrestha of Okhaldhunga during the Maoist insurgency in 1998, was recommended for a presidential pardon by the government stating that he had already completed 40 percent of his jail term and demonstrated good behavior.

The government’s decision to pardon convicted murderer Dhungel, who still had 12 years jail term left to serve, has drawn widespread criticism. Human rights activists and the main opposition party Nepali Congress have said that the government has severely misused the presidential pardon by freeing a criminal like Dhungel, who was involved in brutal killing.

The main opposition Nepali Congress, raising the issue in parliament on Tuesday, warned of protests if the government does not immediately withdraw the decision to free Dhungel.

“The trend of making arbitrary decisions like releasing murderers used to take place only during monarchy. The prime minister is not a king to grant pardon to whosoever he likes. If the government does not immediately withdraw its decision to free Dhungel, our party will take to the streets,” NC lawmaker Gagan Thapa said in parliament.

Similarly, Ujjan Kumar’s family members said that they will internationalize the government’s decision to release Dhungel.

Ujjan’s sister Sabitri Shrestha said, “The government is not bothered about listening to the families of victims. Instead, the government is more concerned with the welfare of criminals.”

Om Prakash Aryal, an advocate overseeing the case from the victim’s side, said that the victim family can lodge complaints with the United Nations Human Rights Council and Human Rights Committee about the government’s move to release Dhungel.

“Dhungel is still threatening the victim’s family members. The release of the criminal has only made them further more insecure,” he added.

SC decision to jail me influenced by media, activists: Dhungel