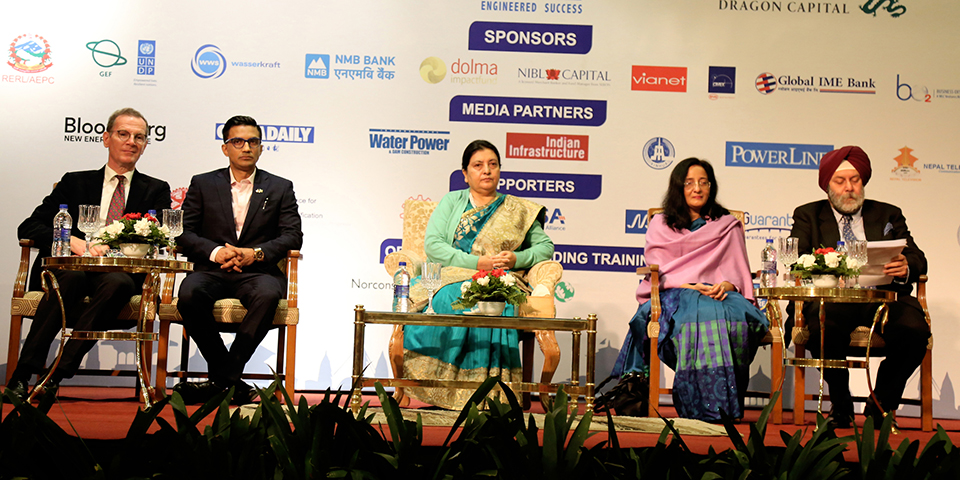 KATHMANDU, Jan 27: President Bidya Devi Bhandari has stressed the need for developing infrastructures to promote economic development. Harnessing hydropower was an infrastructure development and also constitutes a base for prosperity, she added.

President Bhandari said this while inaugurating Nepal Power Investment Summit organized by Energy Development Council in Kathmandu aiming at providing key role in the development of power sector in the country.

She said rapid development of renewable energy sources also requires due attention in the context of negative consequences for environment posed by impact of climate change and excessive use of fossil fuels.

Stating that our enormous natural resource is not being utilized, the President added majority of our population is deprived of access to even minimum electricity facility.

Urging the investors to invest in hydro sector, President Bhandari said that hydro sector was a fertile one to make investments adding, "I would like to call upon local and foreign investors to actively get involved in utilizing our enormous hydropower resources."

On the occasion, she assured that the government was committed to creating a favorable atmosphere for investment by taking due consideration of the investors' interest and real needs.

"We need capital, technology, market feasibility and development of cross-border transmission line for implementation of large-scale projects and the government will accord top priority to attract foreign investment in hydropower," she reiterated.

The President also said that there was a good opportunity to invest in hydropower sector as the demand for electricity was soaring in Nepal and South Asia, where rapid development was being expected.

On the occasion, Bhandari said that development of hydropower in Nepal would benefit the neighboring countries as well and eventually contribute to economic development of the region.

During the program, Indian Ambassador to Nepal Manjeev Singh Puri said that India was always supportive of Nepal's energy sector's development, adding that both the countries were jointly working in this sector.

A total of 350 plus representatives from different countries are attending the three-day-long summit.

The government would be requested for the implementation of the recommendation of the summit, the organizers said. RSS