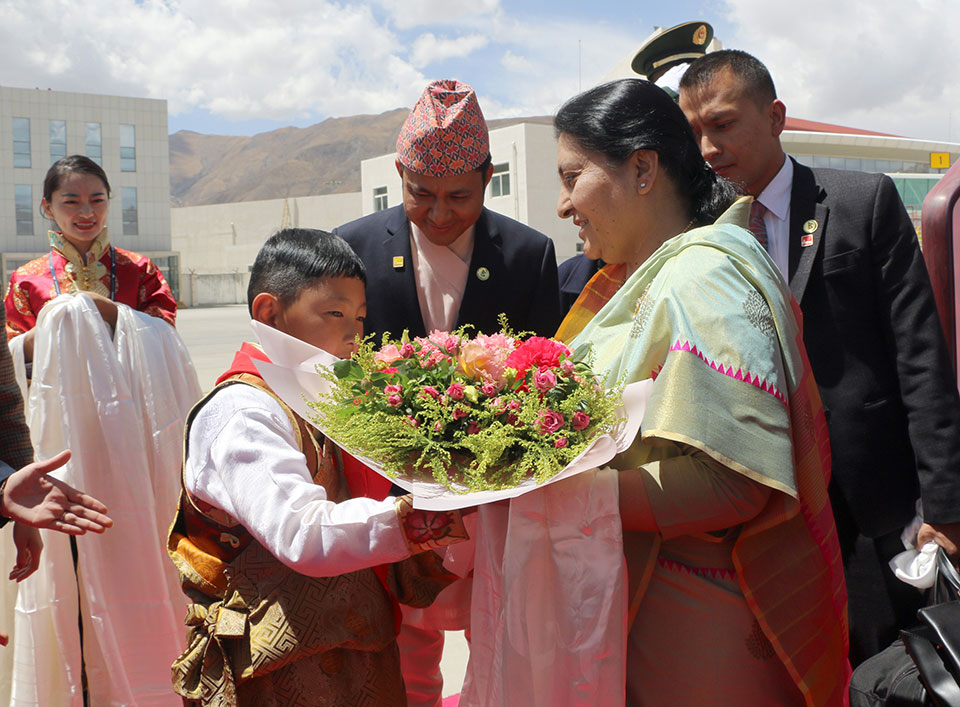 BEIJING, April 30: President Bidya Devi Bhandari who has been on the nine-day State visit to the People’s Republic of China, at the invitation of her Chinese counterpart Xi Jinping since April 24 has arrived Lhasa from Beijing.

Upon her arrival at Lhasa-based Gongar Airport, she was received by executive vice president of Tibet autonomous region.

During the visit, the President addressed the Second Belt and Road Forum for International Cooperation at China National Convention Center on April 26. The President also held a bilateral meeting with her Chinese counterpart on Monday at the Great Hall of the People in Beijing, which ended with the signing of seven agreements.

Among the several agreements between Nepal and China, Finance Secretary Lal Shanker Ghimire and Wang Xiaotao of the China International Development Cooperation Agency, signed in the presence of the two Heads of State, include the meeting minutes on financial and technical support agreement and consolidating support to the livelihood sector in northern Nepal.

As per the agreement, Nepal will get an economic assistance equivalent to RMB (Renminbi) one billion from the northern neighbor to invest in projects of mutual consent aimed at improving the people’s living standard and related to the post-disaster reconstruction and basic infrastructures sectors, the Beijing-based Nepali Embassy said in a press note.

President Bidya Devi Bhandari’s visit to China to participate in second Belt and Road Forum for International Cooperation has been... Read More...