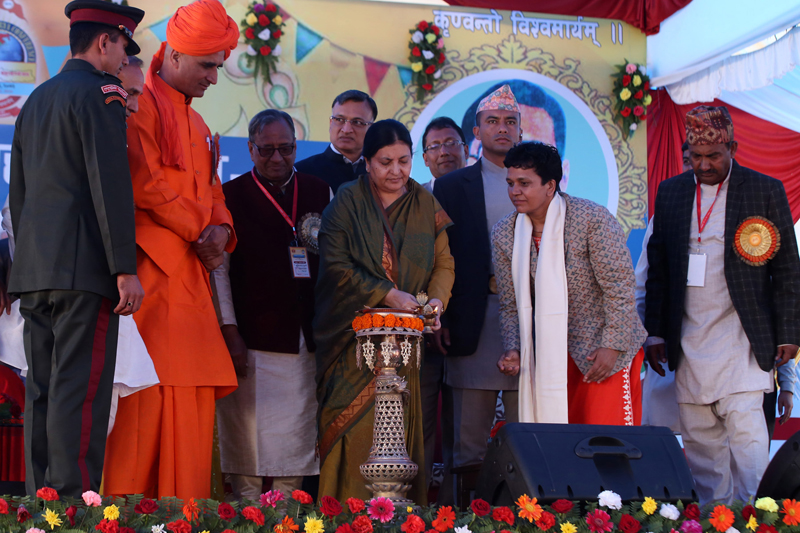 KATHMANDU, Oct 20: President Bidya Devi Bhandari has spoken of the need to establish the ideals of the Vedic values.

Inaugurating the International Sanatan Vedic Arya General Conference at Tundikhel in the capital city on Thursday, President Bhandari glorified the virtues of the Vedic cultures, one among them are- Yoga and Ayurveda, she puts.

Stating that the Vedic era had accorded equal rights to the women, the Head of the State lamented that such a glorious tradition saw erosion post-Vedic era.

She underscored Vedic knowledge to propagate the essence of 'Basudhaiva Kutumbakam' (The world is a single family) and 'Sarve Bahwanti Sukhina' (May all be happy).

On the occasion, Swami Sampurnananda Saraswati lauded luminaries Sita and Buddha whose deeds, he added, shone a light on Nepal.

He also argued that the birth of Lord Rama would not have been realized if sage Shringi, who resided in Dolakha in Nepal, had not gone to Ayodhya in India and performed yagya in King Dasarath's palace.

Similarly, Janardan Ghimire, Sanskrit teacher at Tribhuwan University pointed out the need to promote Vedic knowledge in every household by translating Vedas in Nepali language.

Altogether 8,500 representatives, including 5,000 from the host country and 3,000 from India among other countries, are taking part in the conference.

A procession was held after the inauguration that began from the Sahid Gate and went through Tripureshowar to the 'tree' at Teku where martyr, Sukraraj Shastri, was executed, according to Dr Madhav Prasad Upadhyay, Coordinator of the Organizing Committee.

During the conference, yoga camps will be held on all three days from 5 am to 6 am.
Similarly, eight separate conferences will be organized on the sidelines of the general conference, informed Dr Upadhyay informed.

The Conference, organized by Nepal Arya Society, will last on October 22.
The Arya Society was first established by Swami Dayananda Saraswati in 1875 in India.

Its Nepal chapter was established in Nepal in 1997 BS with the active participation of Madhavraj Joshi, father of martyr Sukraraj Sastri.  RSS

PHOTOS: Meet a youth who is trying to keep ancient printing techniques alive
23 minutes ago

We will select leadership by consensus to the extent possible: Deuba
53 minutes ago

MCC should not be passed under any circumstance: Gajurel
2 hours ago