President Bidya Devi Bhandari attending a special program organized by the Nepalese Army at the army parade ground at Tundikhel on the occasion of the Mahashivaratri festival and the Army Day-2017 on Friday. (Prabin Koirala/Republica)

KATHMANDU, Feb 24: President Bidya Devi Bhandari attended a special program organized by the Nepalese Army at the army parade ground at Tundikhel Friday on the occasion of the Mahashivaratri festival and the Army Day-2017.

On the occasion, President Bhandari laid a wreath at the Bir Smarak (monument to the brave soldier) at the Army Pavilion and paid tributes to the soldiers. She also acknowledged the guard of honor. The President is the Supreme Commander of the Nepalese Army.
President Bhandari also at the function launched 'Sipahi', the special annual journal published by the Nepalese Army, Directorate of Public Relations, and presented cash prizes and certificates to the winners of the freefall jump.

Sergeant Ruben Patwar bagged the first prize and Warrant Officer-2 Arjun Gautam the second prize in the freefall jump. The Nepalese Army has been observing the Army Day on the occasion of Mahashivaratri Festival since 1991.

Soldiers opened celebratory fire from rifles and cannons on the occasion. The Army also presented a march-past, display of armaments and military equipments, freefall/fly past, military skills, cultural show and band display.

Mass PT display including 'shoot to kill', Taekwando and khukuri drill were also presented.
The Nepalese Army Directorate of Aviation displayed the banner from the helicopter.
A tableau depicting the rescue of people during terrorist attack was also presented by the Special Forces Brigade.

Also attending the function were the Defence Minister Bal Krishna Khand, government ministers, high-ranking civil servants, chiefs of the security bodies, heads and representatives of the diplomatic missions in Nepal, and distinguished persons from various walks of life.

People in large numbers thronged around Tundikhel to observe the Mahashivaratri and Army Day celebrations. Some television channels had carried live the proceedings of the ceremony.

Before this, Chief of the Army Staff, Rajendra Chhetri presented trophies to the Shreejung Battalion and the Birbhadrajung Company which stood first and second respectively in the 'nature conservation' task.

Likewise, the Army banner was presented to the Durgabaks Battalion on the occasion. RSS 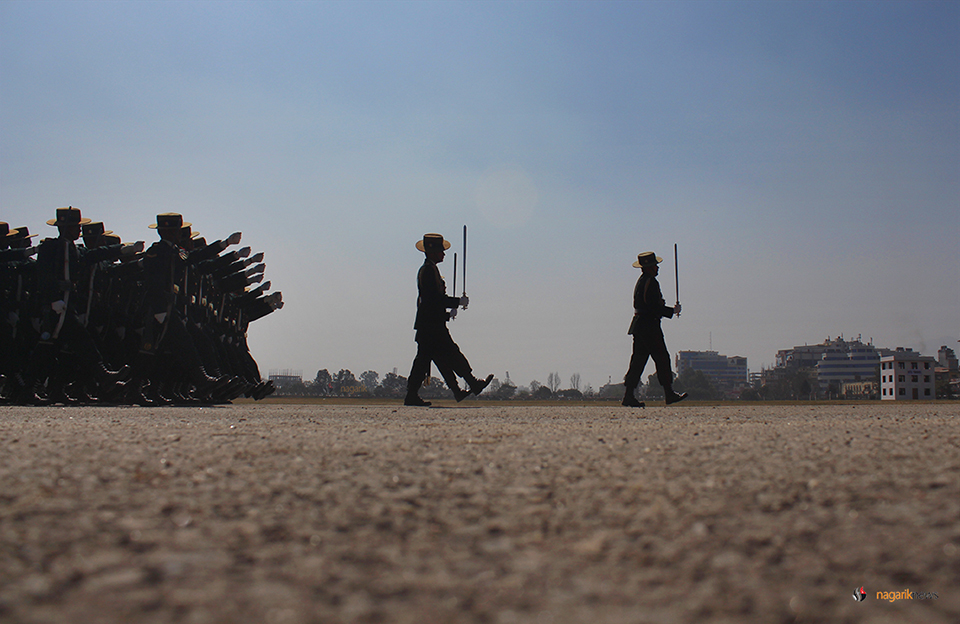 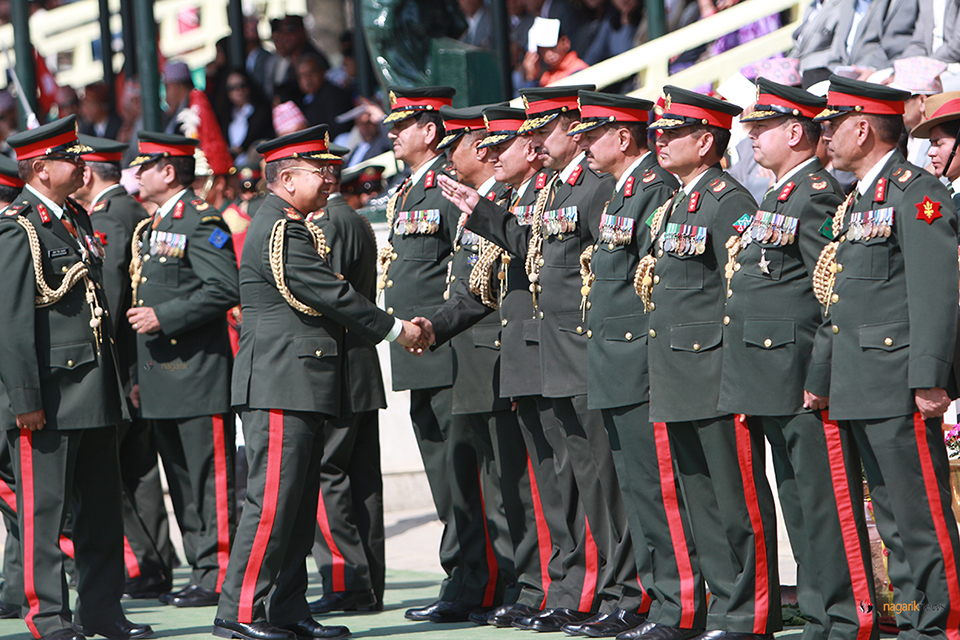