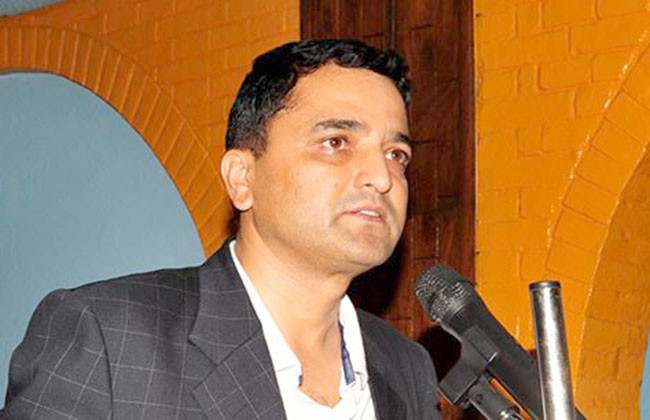 KATHMANDU, Dec 14: Minister for Culture, Tourism and Civil Aviation Yogeh Kumar Bhattarai has said that preparations are going ahead on a war footing for the Visit Nepal Year 2020.

The Minister said this in an interview to RSS in the context of only two weeks remaining to go for the inauguration of the Visit Year. The Visit Year will formally kick off on the New Year's Day on January 1. President Bidya Devi Bhandari will inaugurate the event amidst a grand ceremony at the Dasharath Stadium. It will also be simultaneously inaugurated from all the seven provinces.

According to him, the Ministry has invited dignitaries, including the Tourism Ministers from 40 countries to the Visit Year inauguration programme. The aim is to bring two million visitors during the Visit Year. He said the recently concluded 13th South Asian Games (SAG) has also contributed to some extent in publicizing the Visit Year abroad through the athletes and officials who came here for the event. Also taken as the 'Olympic' of the South Asia, SAG was held in Nepal from December 1 to 10.

In his view, the 13th SAG has been a grand success in terms of the managerial, infrastructural and leadership capacity and the performance aspects, and it has instilled a sense of confidence in the athletes as well as the nation. He said the successful organization of the 13th SAG was an example that Nepal is capable of organizing any kind of international programmes.

"The various statements made and the meetings held on the occasion of the SAG have supported in an important way to preparing for the Visit Year," he said. "I had informal meeting and talks with the representatives of the international sporting bodies and the Save the Mission of different countries during the inauguration and concluding function of the Games as well as while watching the competitions. They know about the Visit Year and I found they have their full support and goodwill for the event," Minister Bhattarai said adding that in this sense as well the organization of the 13th SAG amidst the preparations for the Visit Year was a happy coincidence.

He said the officials of the Nationals Sports Council and the Nepal Olympic Committee had also informed the sports officials of the participating countries regarding the Visit Year, which was reflected in their statements as well.

Similarly, the reference to the Visit Year was also made by the Prime Minster in his concluding remarks. Asked about the level of preparations for the Visit Year, the Tourism Minister said, "Although we announced the Visit Year targeting 2020, it is a continuous process. It is not something that starts on January 1, 2020 and ends on December 30, 2020. Now we will move forward coining the slogan 'A Decade for Tourism' in Nepal and formulating a fitting plan.

Presently, we are especially geared towards the Visit Year inauguration on January 1. The Visit Year will kick off abroad a well from January 7, 2020. At present, we are making main preparation for this." He shared that he has also been holding discussions and interaction on a regular basis with several stakeholder organizations regarding the preparations for the Visit Year.

"Likewise, the Visit Year Secretariat, Nepal Tourism Board and the Ministry of Tourism's all human resources were working on the preparations for the tourism mega campaign. We have concentrated all our attention on this," he asserted. The Tourism Minister said that various publicity materials for the Visit Year have been prepared for disseminating them in the international media and the international media too have been invited to the inauguration function of the Visit Year 2020. He expressed the confidence that the Visit Year is going to be very successful with the joint efforts of the government, the private sector and the people.

KATHMANDU, Jan 25: The West Indies juggernaut Dwayne Smit is all set to play for Bhairahawa Gladiators in the upcoming... Read More...

Teaching with rubrics
11 hours ago

'Community should continue efforts to enliven culture'
16 seconds ago

Prosperity not a far cry, Minister Basnet says
1 hour ago