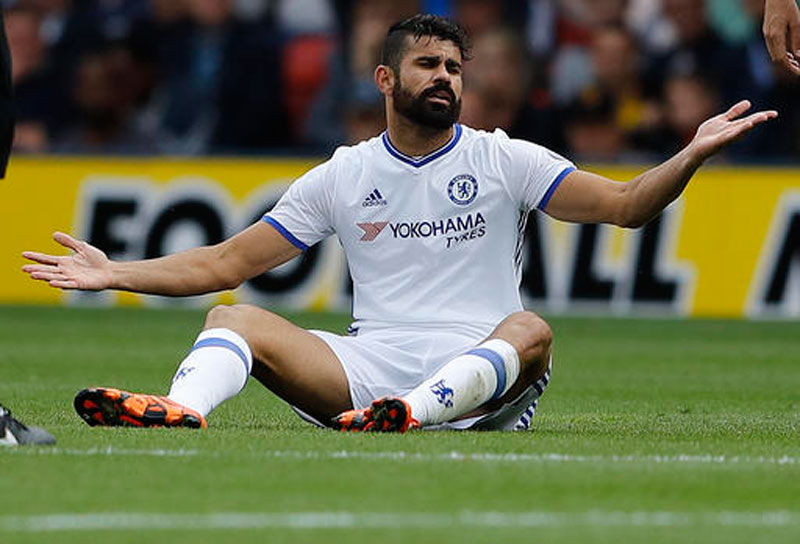 MANCHESTER, Aug 24: WWE-style grappling at corner kicks, manhandling of match officials, verbal abuse: Sometimes the beautiful game can take on an ugly side.

This season, at least in these early weeks, English Premier League referees are taking a stand.

The start of the new English football season has been marked with no-nonsense — some might say over-zealous — officiating that has got fearful defenders re-evaluating their trade and penalty-taking strikers licking their lips at the opportunities coming their way.

One referee awarded two penalties in the same game for pushing and holding in the penalty area at a corner kick. Another has yellow-carded a player for sarcastically applauding a decision. Diego Costa, Chelsea's typically irate striker, has already been booked for aggressively approaching a referee. After two rounds of fixtures, seven penalties have been awarded already, compared to three at the same stage last season.

It's not uncommon for referees to put down markers early in the season or at the start of a major international tournament. Before too long, they have eased off.

It remains to be seen if that will be the case this season.

"It's fine as long as it's consistent right from now to the end of the season," Stoke manager Mark Hughes said. "Usually it isn't."

Stoke has been one of the teams to suffer from the vigorous officiating. The team fell behind to Manchester City on Saturday when defender Ryan Shawcross was adjudged to have pulled back an opponent at a corner and conceded a penalty, converted by Sergio Aguero. In the second half, City conceded a penalty after Raheem Sterling impeded Shawcross at a corner when he wasn't even looking at the ball.

After the game, both managers accepted there was a clear move by referees to act on grappling and shirt-pulling. And their players are starting to take note.

"The penalty was given for using my hands," said Shawcross, a physical and uncompromising center back. "It's something I'm going to have to look at and hopefully adapt in the right way, so I don't give any more penalties away."

City defender John Stones also said he and his teammates would have to adjust to the new directive. Yet, there were also protests that things were being taken too far.

"If they're penalties, then you're going to be giving two or three a game and it's going to be a farce," Stoke striker Peter Crouch said.

"We were told they were going to give more penalties this year so we can't say we weren't given a warning. Even so, when you see it in the cold light of day it's hard to take."

Yet, grappling at corners wasn't one of the issues the Premier League was openly targeting heading into the new season. The most popular league in the world was more concerned with the damage that abuse of match officials was doing to its image.

To that end, the league's top brass called for tougher action on dissent, insulting language and gestures, physical contact toward officials, surrounding officials and misconduct in the managers' technical areas.

"People look to us to set the example across the world," Richard Scudamore, chairman of the Premier League, said during the offseason.

That's exactly what is happening.

Bournemouth midfielder Harry Arter collected the first of his two yellow cards against West Ham on Sunday for dissent toward an assistant referee, and was later criticized by his manager.

"We've been told about dissent — it's been drilled into us," Bournemouth manager Eddie Howe said. "If we lose our discipline, we could have a flurry of red cards."

"They explained everything again," Middlesbrough manager Aitor Karanka said Tuesday. "We have to be careful, they are the rules."

Some players don't appear to be getting the message, though.

Costa had 23 yellow cards and one red card — for angrily approaching a referee — across his first two seasons at Chelsea. He has been booked in both his opening league games this year, too, the first for dissent toward a referee.

Asked if he knew about the new dissent law, Costa told ESPN: "I am aware of it now."