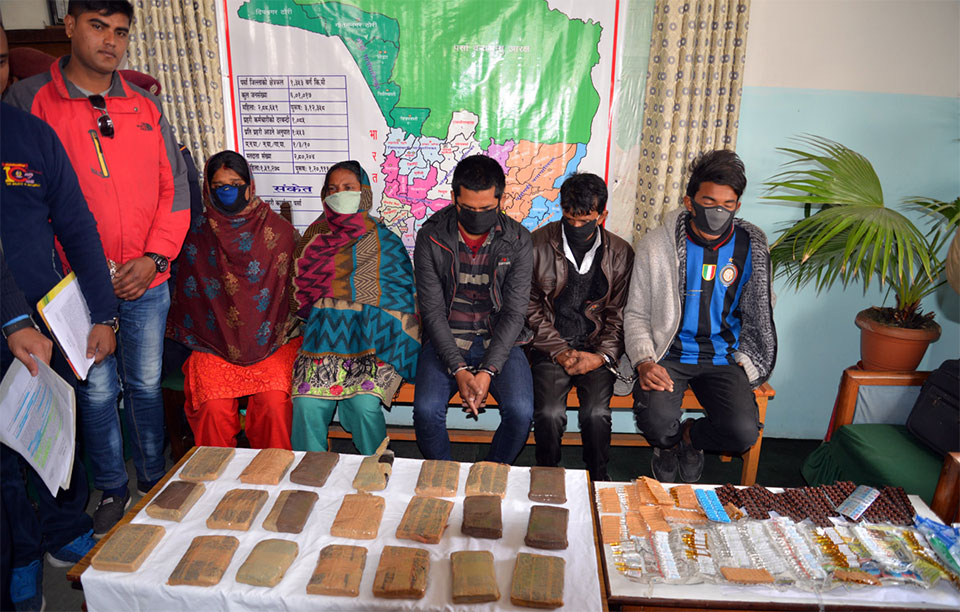 PARSA, Feb 1: Criminals dealing in narcotics have been found using pregnant women and new mothers in its trafficking.

This was revealed after police here arrested a mother of an eight-month-old baby with 10.5 kilogrammes of hashish from Rajat Jayanti Chok in Birgunj recently and interrogated her.

On the basis of their investigation, police arrested Apsana Khatun, the mother of the eight-month-old baby, Rehana Khatun and Jahur Alam. Alam, a resident of Motihar, India, is the narcotics dealer.
They were presented before the media at a news conference the District Police Office, Parsa organised here on Wednesday.

On the occasion, Ganesh Regmi, Superintendent of Police at the District Police Office, Parsa said that the criminals dealing in narcotics use pregnant and new mothers in trafficking the drugs from Nepal to India, thinking that the security personnel at the border will not carry out a body search on these women.

It was also found from the investigation that the narcotics dealers pay between Rs 2,000 to Rs 2,500 to these women for smuggling out the narcotics to India. Mostly, the criminals purchase the narcotics in Hetaunda in Makwanpur district, it is stated.

At the news conference, the Parsa Police also paraded two youths who were arrested for their involvement in smuggling in banned injectable drugs. They are Rohan Khadka of Anantalingeshwar Municipality, Bhaktapur and Dipendra Khatri of Hetaunda Sub-metropolitan City-13, Makawanpur district.(RSS)

UDAYAPUR, Dec 24: Police in Udayapur district have arrested as many as 122 people suspected of being involved in drug smuggling... Read More...