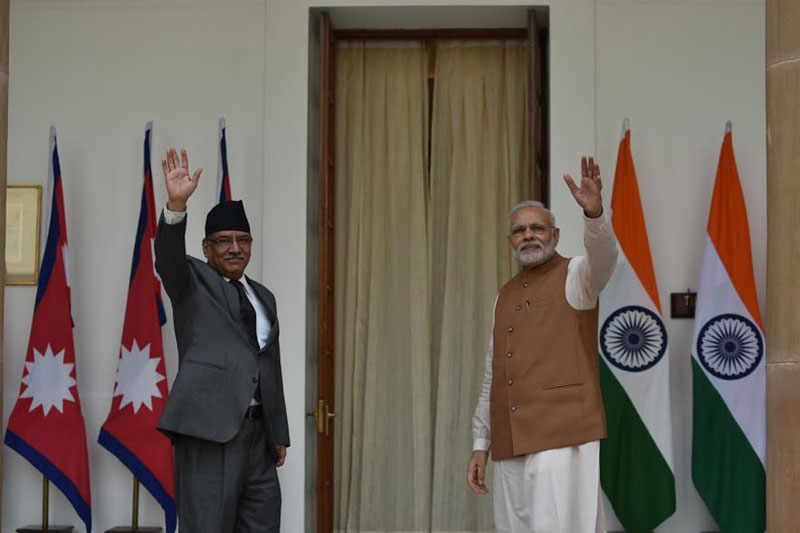 Prime Minister Prachanda is emerging out of the old mould and embracing the new matrix of international relations
The prime minister is back from his vital visit to India. Customary cribbing and nit-picking by known adversaries had begun even before he had embarked on the return flight to Kathmandu. But well-wishers of Nepal and independent observers are unanimous that he acted like a statesman during the four-day trip. There was no hint of being hounded by political rivals and died-in-the-wool opponents of Nepal-India ties.

Prime Minister Prachanda made it clear that he was his own man. What is best for Nepal vis-à-vis India continued to remain on the top of his agenda in New Delhi. In fact, the terms of interaction with India were quite transparent this time. Even before he had flown to Delhi, he and his establishment had made it abundantly clear that it was an occasion for bridging the trust deficit which had unfortunately developed between the two of the oldest and closest neighbors over the last one year.

The two sides, therefore, worked hard on clearing recent misunderstandings, emphasizing the need to expedite existing bilateral projects and kick off those which were agreed upon years ago but could not be launched for various reasons. The main sectors discussed during bilateral discussions were hydro-power; infrastructure including roads, highways, trans-border railways, check-posts and access to extra sea ports; technical education; project management consultancy; and, of course, earthquake relief. India promised to enhance both the quantum and speed of assistance on these fronts.

In fact, I had highlighted the possible areas of cooperation in my article (Eyes on you, September 13). Prime Minister Prachanda and his Indian counterpart stuck to the script. Nepal did not push the envelope unduly. Prachanda, as predicted, did not talk of new projects. Many may not appreciate this approach as Nepal’s foreign policy over the decades has been based on extracting the maximum from foreign countries and funding agencies. The success of prime ministerial foreign trips has been conventionally judged on this parameter.

The fact that Prime Minister Prachanda did not fall prey to the prevailing mind-set is indeed laudable. Being a supplicant forever does no good to the honor and prestige of a sovereign country. We often hear about “assaults” on Nepali sovereignty and pride. But those hollering the most have done little so far to keep such “assaults” at bay.

The Nepal-India transactional plate already has a lot on it. If the two neighbors are able to execute even the existing projects within mutually decided time and budget, that would be a great achievement. Sustainable utilization of our hydro-power potential and its sale can change the face of our country. The prime minister has done precisely that. He has focused on execution.

Prachanda did articulate Nepal’s expectations in a dignified and suave fashion when, in English and Hindi interviews with government-run Doordarshan in Delhi, he emphasized the need for a big and growing economy like India to display greater generosity (udarata) and flexibility.

But he did assert that his government will not let Nepal’s soil to be used for any anti-India activities. Incidentally, the Pak-backed Jaish-e-Muhammad’s attack on India’s Uri cantonment town causing death of 18 Indian soldiers on September 20th happened when PM Prachanda was in India. He, therefore, fully understands India’s concern for use of terror as a tool of state policy by some of India’s neighbors. His assurance at this juncture has certainly put the Indian government—bureaucracy, intelligence, army and other security agencies—at some ease. This deft move has done a lot to improve Nepal-India ties under the new dispensation.

This is all the more creditable as PM Prachanda’s party is a junior partner in a coalition government and his tenure is also circumscribed as per the agreement with senior partner Nepali Congress. It needed some daring on part of the prime minister as the opposition back home was doing all it could to jeopardize his trip.

The basic principle of a nation’s political class talking in one voice on foreign policy during the government head’s visits abroad was torn to shreds by the opposition. Little does the opposition realize that its hyperventilated ideological leanings at such critical junctures can only damage the national interest. The freedom to air one’s views is the essence of democracy but so is its timing.

I have been repeatedly saying that the world is a globalized village now. Ideological dogmas can no longer drive inter-country bonds. The opposition needs to think hard how Nepal’s support to India for a permanent seat in the UN Security Council issue can be detrimental to the country. It makes sense to have more than one reliable partner.

Realpolitik is the name of the game now. Mature nations follow this cardinal principle.
Yet, much furor was created in Kathmandu over certain points of the 25-point Nepal-India joint statement. The Prachanda government promptly issued cogent clarifications about some of the misgivings and concerns of the opposition. We need such communication management to scotch rumors that may turn into political infernos.

There is renewed dissidence against promulgation of the amended constitution through political and social consensus. Prime Minister Prachanda will need to employ all his political skill and vision to ensure unanimity over the pending constitutional amendment. After all, Nepal’s social and political harmony is at stake.

It is heartening to note that Prime Minister Prachanda is emerging out of the old mould. He is embracing the new matrix of international relations. Hard reality is taking precedence over outdated dogmas. This bodes well for Nepal.

The author is Poet and Writer and also Chairman of BLC and Basant Chaudhary Foundation. Views are personal.