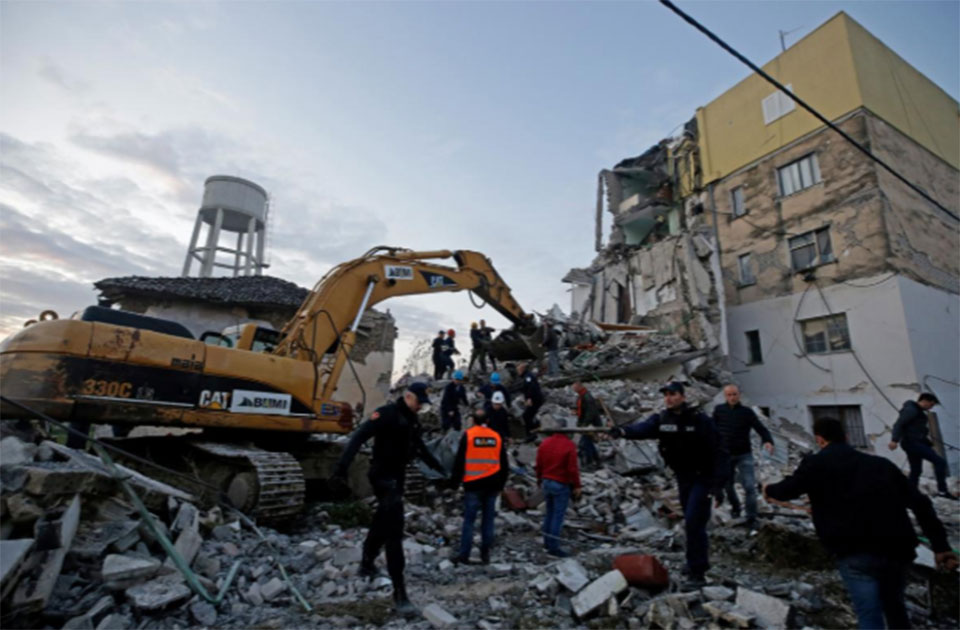 TIRANA/DURRES, Albania, Nov 27: At least 21 people were killed when the most powerful earthquake to strike Albania in decades shook the capital Tirana and the country’s west and north on Tuesday, tearing down buildings and burying residents under rubble.

Residents, some carrying babies, fled apartment buildings in Tirana and the western port of Durres after the 6.4 magnitude quake struck shortly before 4 a.m. (0300 GMT).

The Balkan country was jolted by 250 aftershocks after the main tremor, Defence Minister Olta Xhacka said, two of them of magnitude 5, testing strained nerves.

She told reporters that the quake’s epicentre was in Durres, Albania’s main port and a tourist spot, adding: “Around 600 residents were injured and received treatment.”

In the northern town of Thumane, Marjana Gjoka, 48, was sleeping in her apartment on the fourth floor of a five-storey building when the quake shattered the top of the building.

“The roof collapsed on our head and I don’t know how we escaped. God helped us,” said Gjoka, whose three-year-old niece was among four people in the apartment when the quake struck.

The quake was centred 30 km (19 miles) west of Tirana, the U.S. Geological Survey (USGS) said, and was also felt across the Balkans and in the southern Italian region of Puglia, across the Adriatic Sea from Albania.

Hours later a magnitude 5.4 earthquake rattled Bosnia, with an epicentre 75 km (45 miles) south of the capital Sarajevo, monitors said. There were no reports of injuries.

In Durres, 13 bodies were pulled from collapsed buildings and 45 people were rescued from the wreckage there and in Thumane.

After a 14-hour ordeal, a 30-year-old woman was extracted alive from the ruins of a six-storey building, two hours after police removed the body of her eight-year-old daughter.

At dusk, a woman called Bukuri Morina and her family of 10 joined thousands of others to spend the night at the Durres soccer stadium, where the army had pitched tents.

“We are afraid to go back to our apartment,” she said. “There are cracks all over and we are afraid that we will have the same destiny as people in Thumane.”

Located along the Adriatic and Ionian seas, between Greece and Macedonia, Albania experiences regular seismic activity.

A 5.6 magnitude quake hit Albania on Sept. 21, damaging about 500 houses. The Defence Ministry said then it was the most powerful quake in Albania for the past 30 years.

The images of damage from Tuesday’s quake suggested it was stronger than one in 1979 which razed a district of a northern town. Neither of those two earlier quakes caused deaths.

Albania is the poorest country in Europe, with per capita income a quarter of the European Union average, according to the International Monetary Fund.

For a graphic on the location and intensity of the quakes, click - here

BEIJING, Oct 17: A 6.4 magnitude earthquake struck China's northwestern province of Qinghai on Monday, the US Geological Survey reported, in an area... Read More...

NCP should not form new govt under NC’s leadership: Lalbabu Pandit
22 hours ago
NC decides not to give its words as NCP factions solicit support to form govt
16 hours ago