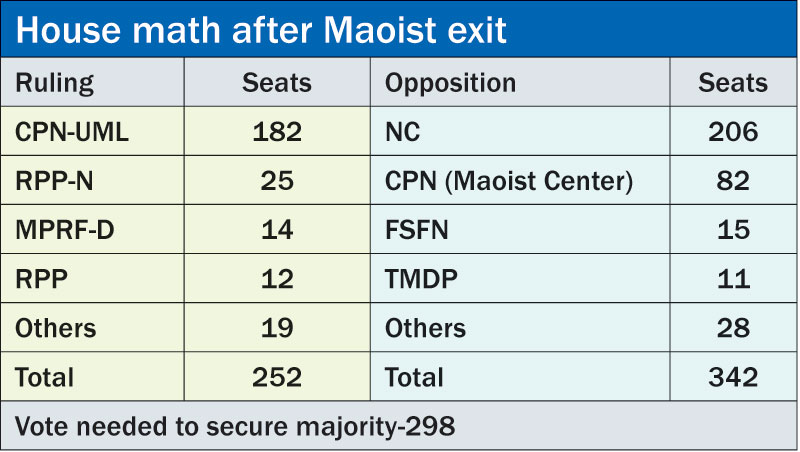 The government has lost majority in parliament nine months after the election of Oli, who secured 338 votes in the House, on October 11 last year.

Krishna Bahadur Mahara, parliamentary in-charge of the Maoist Center at a press conference on Tuesday announced the party’s withdrawal from government. The Maoist Center pulled out of the government after it reached an agreement with Nepali Congress (NC) on forming new government under the leadership of Maoist Center Chairman Pushpa Kamal Dahal.

Leaders from NC, the largest political party in parliament, and Maoist leaders reached a seven-point agreement on forming new government.“Nepali Congress and CPN (Maoist Center) will form a coalition government for implementing the commitments. For this, the CPN (Maoist Center) shall immediately withdraw its support to the UML-led government and recall its ministers from the government and initiate all necessary procedures for the election of prime minister,” reads the seventh point of the agreement signed by NC President Sher Bahadur Deuba and Maoist Center Chairman Dahal.

Mahara at the press conference announced that NC has agreed to allow Dahal to head the government in the first phase. He, however, declined to delve into the details of the agreement and the timeframe given for the Maoist-led government.

Sources also informed that leaders from the two parties have also reached an understanding to allow the Dahal-headed government to hold elections for the local bodies and that the next government to be headed by Deuba will conduct polls for provincial levels and central parliament.

The Maoists have claimed that the party had to quit the government as the Oli-led government betrayed them by not implementing both the nine-point agreement and a separate three-point gentleman’s agreement reached between the two sides on May 5.

In the gentleman’s agreement, the UML leaders had reportedly agreed to allow Dahal to form government immediately after the passage of budget by parliament.
But Maoist leaders said they were betrayed by the UML as the latter breached the understanding by not becoming ready to hand over the government leadership as per the agreement.

Though the nine-point agreement, which is silent about any government handover, was formally made public, the two sides never made any formal announcement of a purported three-point deal.

Meanwhile, Deuba has called the party’s central working committee (CWC) meeting for Wednesday morning that will take a formal decision with regard to the party’s role in forming new government.

Any leader aspiring to become prime minister must secure 298 votes in parliament. As the NC (206) and CPN (Maoist Center) jointly have 288 seats, it should not be difficult for them to manage the remaining votes. The agitating Madhes-based political parties are relatively positive toward the NC and Maoists. Also other fringe political parties may become ready to join the government in the hope of getting portfolio in the new coalition.

The letter that marked Maoist-UML divorce
4 years ago

What’s in the NC-CPN (Maoist Center) 7-point deal on bringing down Oli govt?
4 years ago