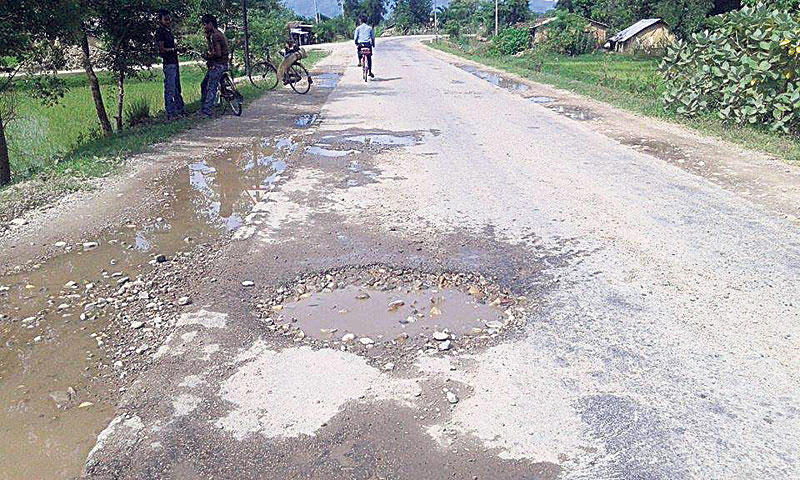 Bardia had highest number of enforced disappearances, most of them picked up by the security forces. Their whereabouts remain unknown
Given the absolute power to rule a pristine kingdom at an age of youthful exuberance—he was barely 27 when he ascended to the Serpent Throne after the death of his autocratic father in the winter of 1972—King Birendra was susceptible to delightful fantasies. The 1970s were the years of intensification of Cold War and imprudent counselors, incompetent courtiers and ingenious conmen alike were selling snake-oil solutions for deep-rooted problems of flailing Third World countries. The young king grew old chasing impossible dreams; and by the time he fell to his son’s bullets in June 2001 in the Narayanhiti Massacre, all his delusions of grandeur had already been shattered.

Perhaps at the prompting of the Nixon-Kissinger cabal that was busy building bridges to Maoist China to balance the evolving relationship between the-then USSR and India in the wake of independence of Bangladesh, King Birendra came up with the idea of “Zone of Peace” at his coronation in 1975. The proposal was doomed from the start because rejection of the India-Nepal Treaty of Peace and Friendship-1950 was clearly implied in the pitch. New Delhi refused to buy the bluff and the diplomatic adventure died an unceremonious death.

When King Birendra inherited reins of the state from his ruthless father, the country was already in bad shape due to years of malgovernance. The government machinery had been filled with contemptible cronies and creeps of the Shah-Rana clan. There was no opposition to voice aspirations of the people. The media, in whatever form it existed, was tightly controlled and was incapable of holding government to account. A civil society competent and courageous enough to tell the truth to power was conspicuous by its absence.

It’s in the nature of autocracy that it sees only what it wants to see, hears only what sycophants sing, and speaks its mind without contemplating unintended consequences of careless utterances. The manipulation of Referendum in 1980, perhaps at the instigation of Indian interlocutors worried about pro-West proclivities of Nepali Congress leader BP Koirala after the Soviet occupation of Afghanistan, destroyed the residual credibility of Shah Monarchy.

Napoleonic desires
King Birendra’s developmental delusions were equally majestic. He wanted Madhes to produce grains for export without realizing that Indra—the Hindu God of Rains—was not a very reliable provider of water for irrigation. The hills were supposed to produce enough vegetables, fruits and herbs to feed the Indian middleclass. His Japanese confidantes perhaps failed to brief him about unsuitability of instable slopes for investment-heavy horticulture. The Swiss idea of breeding cattle at commercial scale in the high mountains was equally flawed—steep slopes where a long dry season is followed by a brief interlude of torrential rains and the layer of top soil is rather thin—aren’t conducive for either large-scale grazing or intensive cultivation of leafy fodder.

Nearly 50 years after King Birendra’s daydreams, Nepal continues to be an importer of food grains, vegetables, fruits, dairy products, fish and meat. Meanwhile, import of timber has been added to the expanding list. Hardwood forest had been recklessly cleared in Madhes to resettle loyal ethnics from mid-mountains. However, these disappointments pale in comparison to King Birendra’s colossal failures in creating new towns or reviving old settlements in the mid-hills to counter organically evolved bazaars along Indo-Nepal border that were thought to be dominated by ethnic Madhesis, and hence not Nepali enough to be worthy of culturally pure realm of his dreams.

Dhankuta in the eastern hills had neither an airport nor a road link with the southern plains when it was declared the headquarters of the Eastern Development Region. Hetauda was too close to Birgunj and too hot and too humid to develop as an alternative to Kathmandu.

Pokhara was slightly better connected with the national capital and the Indian border, but it had little access to its catchment settlements. Similar fate awaited Dipayal that depended on a narrow airstrip for everything.

Surkhet was to be something different: King Birendra had wanted it to be patterned after Paris, his favorite city in the world. He agreed to bestow his name on the settlement and the valley became Birendranagar overnight. Sadly, even kings don’t get to ride wish-horses. Despite the boom-town appearance for a while after the opening of highway to Jumla, Surkhet remains a sad settlement enveloped in the darkness of despair for much of the year. Hindu pilgrims headed for Kailash Mansarovar give it a festive look for a brief period during the summer.

The road from Nepalgunj to Kohalpur has been widened to facilitate the movement of heavy-duty trucks that bring in consumer goods from across the border. Financed without foreign assistance of any kind and surveyed, designed and constructed by Nepali engineers and builders, the road between Kohalpur and Surkhet was once a showcase of domestic technology. Sadly, over a quarter of a century after its inauguration, the road remains in the same condition.

When the town was planned in the 1970s, it was anticipated that people will rush to populate the valley between Chure Hills and the Mahabharata Ranges. Capital investment in infrastructure was slow-paced. Until the late-1980s, there were few takers for residential plots other than speculators or government employees. Maoist insurgency did fuel in-migration from surrounding hills. After the opening of Jumla road, it has become a pit stop for trucks that ferry goods from Jamunaha border up into the high mountains.

The only commercial activities that seem to have shifted to Surkhet from Nepalgunj are bustles of flourishing NGO industry in the region. Almost every shiny bungalow these days boasts of either an NGO signboard or the marker of an international agency. All kinds of experts descend on the town from Kathmandu to conduct consultation, motivation or training sessions towards the end of the fiscal year. Hospitality industry is trying to catch up with the demand in a haphazard manner.

Peace ennui
Having once been a Maoist hotbed and the epicenter of counter-insurgency operations of security forces, Surkhet is uniquely suited to reflect on legacies of over a decade-long armed conflict that ended in a stalemate. In practical terms, it was a struggle where both parties—the insurgents as well as the government—emerged victorious and the people were the only losers. With perpetrators from both sides standing together with clasped hands, their victims have no choice but to learn to survive in solidarity.

Bardia had highest number of enforced disappearances, most of them picked up by the security forces on the suspicion of being Maoist sympathizers. Their whereabouts remain unknown. Instances of sexual violence were reported to have been common among Tharu and Dalit settlements in Kailali that were perceived to have been Maoist support bases.

Other than a few cases pursued by survivors, the issue has not been investigated with any seriousness. Meanwhile, reconciliation between leaders of opposing forces has already taken place at the center with the ‘guerilla and gorilla’ chieftains taking turns to head the government.

Nepal has a long history of reconciliation without accountability. After the overthrow of Ranarchy in 1950s, the Last Rana became the first Prime Minister of the transitional regime. When multiparty democracy was restored in 1990, two independent commissions were formed to investigate cases of enforced disappearances and violation of human rights. Reports of Shakya and Mallick commissions gathered dust before being forgotten.

Few seem to remember that people investigated to have committed atrocities by the Rayamajhi Commission in as recently as 2006 have emerged as protectors of nationalism, promoters of democracy and practitioners of rule of law within a decade!
In explaining ‘post-truth’ as the word of the year, the Oxford Dictionary defines that the prefix as “belonging to a time in which the specified concept has become unimportant or irrelevant”. Post-reconciliation captures the mood of survivors of the Maoist conflict perfectly: The word once meant restoration of friendly relations between estranged persons or groups. When they become one, the original sense of the term is completely lost.

Listening to harrowing experiences of survivors, it’s impossible to miss a sense of desolation in their narration. When law is on the side of the power rather than the truth, peace and justice remain elusive. All that is needed is tiny spark like the one in Tikapur for fresh fires to erupt. Hills and plains around Karnali are still unquiet. The pall of darkness that falls over Surkhet even during the full-moon night is perhaps symbolic. It will have to remain a garrison town for a long time.

Our development initiative is creating more dependency and pushing for urbanization rather than developing rural areas ... Read More...

Yes, you can call me an optimist. My wife worries more about how she might fail rather than just doing... Read More...