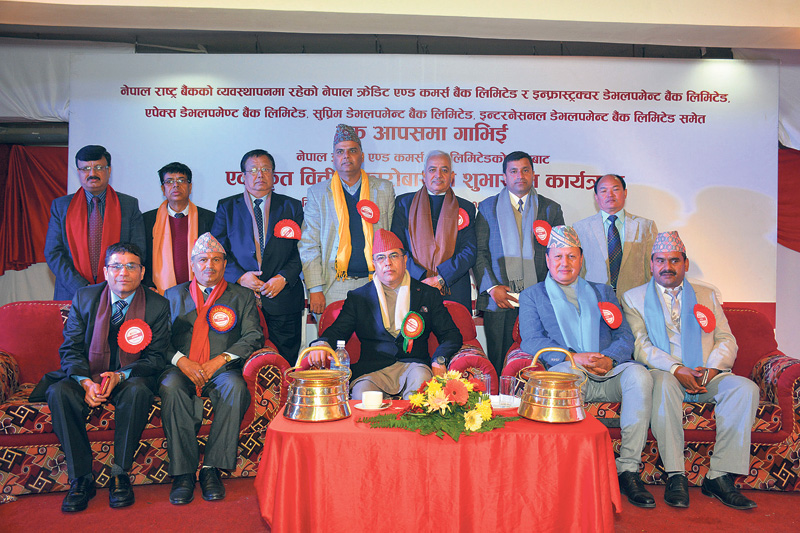 Nepal Rastra Bank (NRB) Governor Chiranjibi Nepal inaugurated the merged entity amid a function on Sunday. Nepal advised bankers to be disciplined while mobilizing people’s deposits. Nepal said bankers and the banks’ board members were custodians of the public’s money and it was their duty to mobilize that money wisely.

Addressing the function, Ramesh Raj Aryal, the chief executive of merged NCC Bank, said the bank had been under the helm of NRB for the last three years after being deemed to have bad corporate governance, but had since improved its financial status and merged with the four development banks.

NCC Bank now has a paid-up capital of Rs 4.67 billion, Aryal said, adding that the bank had around Rs 55 billion in deposit and around Rs 48 billion in loans and advances. “The bank has Rs 980 million in reserve after the merger,” he said.

Aryal further said that after adding what it had in reserve, paid-up capital would cross Rs 5 billion. “We are committed to reaching the mandatory paid-up capital requirement of Rs 8 billion set by NRB before its mid-July 2017 deadline.”

On the occasion, Laxmi Prapanna Niraula, executive director of NRB, who had taken over the bank’s management three years ago, also spoke of his association and achievements during the period.

Niraula and his team left NCC Bank on Sunday, handing over the management to an ad-hoc board.

I will get trust vote with the support of CPN (Unified Socialist): Bagmati CM Shakya
22 hours ago