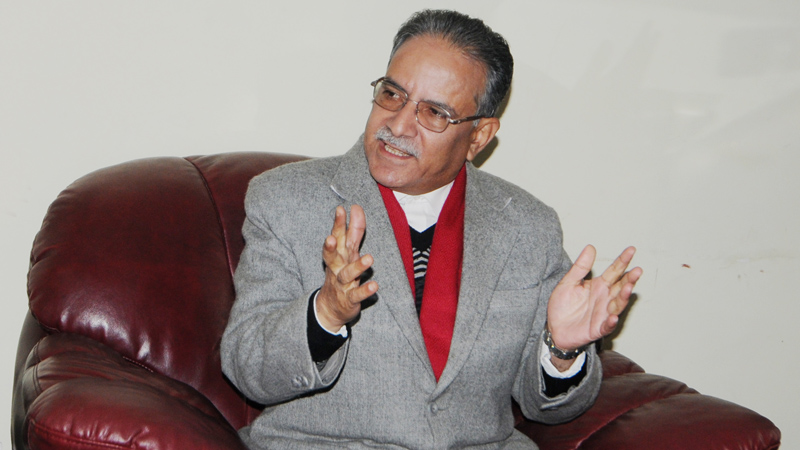 KATHMANDU, June 5: Prime Minister Pushpa Kamal Dahal  has said that economic prosperity and development were not so far if we moved ahead with moral force by setting a goal.

Addressing his farewell programme organised by the Office of Prime Minister and Council of Ministers today, the Prime Minister expressed his hope that positive efforts undertaken by the government under his leadership in regard with the implementation of the constitution and economic growth would be an inspiration to future government(s) as well.

He shared that while assuming the Prime Ministerial post, he was doubtful that whether constitution could be enforced and the Madhes-centric parties would agree to join the election, but was cleared off such doubts on the eve of leaving the government. He said he believed that positive efforts yielded positive results.

He went on to say, "The Madhes-centric parties have been convinced to accept the constitution, acceptability of the country's main law has increased and the country has already held the first-round of election. "The performance of the past ten months of the government was a testament that any political leadership would be a successful and be able to bring a wave of positivism among the people in case of working with good intention and moral force."

The government has been successful in bringing all political parties together and maintaining unity among the people Madhes, hill and mountain, he claimed.

He said though he was leaving the government before the second-round of election, a strong base towards that end had been created and an atmosphere conducive to holding the provincial and central election had been created. He took the devolution of people's rights to their doorsteps through the local level election as the greatest achievement of his government.

PM Dahal said that the government was succeeded in keeping a balanced relationship with its two close neighbours, signing an MoU on the one belt one road (OBOR) initiative with China, initiating a process of the construction of the Kathmandu-Tarai Madhes Fast Track, accelerating the construction of the Hulaki Rajmaraga (postal highway) and making a good progress regarding the implementation of other development projects.

Stating that the economic growth hitting the highest point first time in the last 25 years with the ending of load-shedding was another index to show the success of the government, he thanked the entire bureaucracy including the Chief Secretary for their support and cooperation to the government while working in favour of the people. "Nepal's bureaucracy is competent and transparent as well," he said in admiration.

On a concluding note, the CPN (Maoist Centre) Chair said his party would be joining a new government and expected the same level of support and cooperation to the incoming government from the bureaucracy in the days ahead as well.

On the occasion, Chief Secretary Dr Somlal Subedi presented an idol of the Gautam Buddha to the Prime Minister.

The OPMCM Secretary and senior government officials were also present on the occasion. RSS