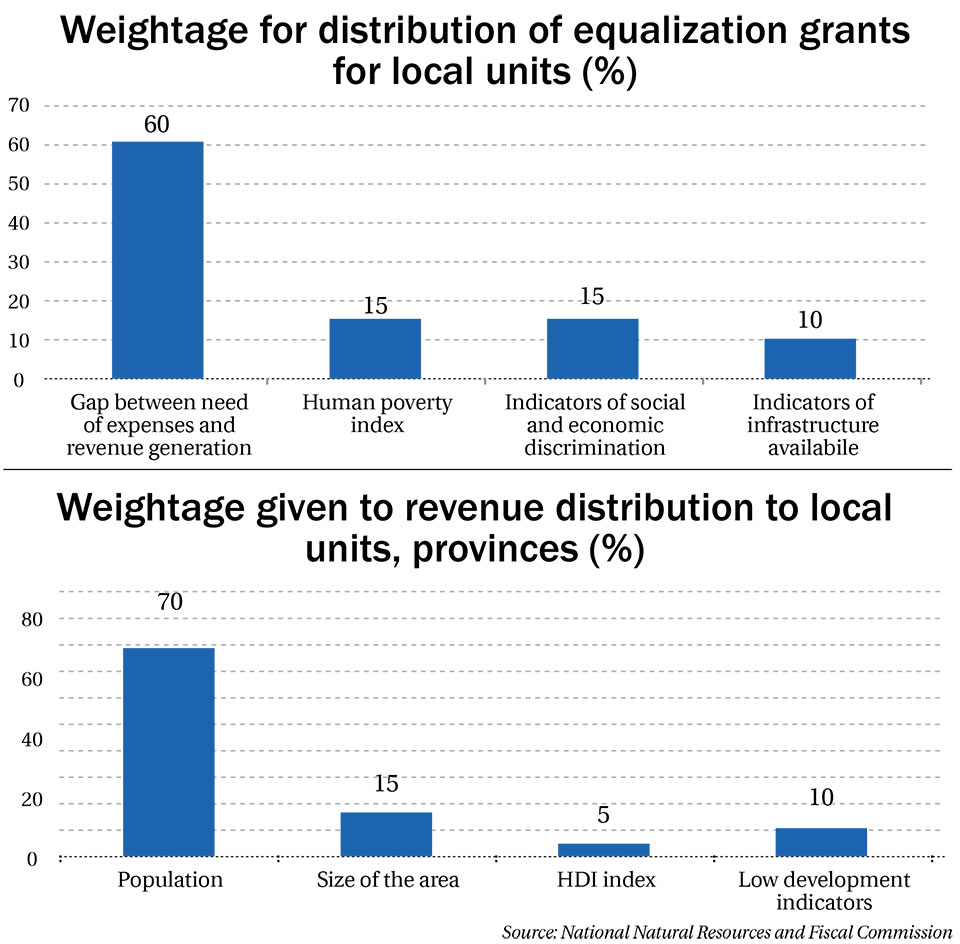 KATHMANDU, May 20: Population, which was the top factor in delineating village councils and municipalities last year, has again been given the highest weightage – 70 percent – in allocating resources to the local levels and provinces. Human Development Index carries only 5 percent value in revenue distribution.

The latest available disaggregated Human Development Index of Nepal is that of 2014, based on the census of 2011.

Two others indicators – land area covered by local levels and provinces and low development indicators – determine 15 percent and 10 percent revenue distribution respectively, according to a copy, obtained by Republica, of recommendation to the federal government for distribution of revenue and equalization grants by National Natural Resources and Fiscal Commission (NNRFC) in March.

The constitutional body that is responsible for advising the government on distribution of resources among governments — federal, province and local levels — has also prepared indicators of low development. The indicators, meant for addressing the need of expenditure and infrastructure development, are based on indicators of available infrastructure, economic and social discrimination, and cost of service delivery in the local levels and provinces.

Based on the same formula, the government will allocate budget to the provinces and local levels for the Fiscal Year 2018/19.

Meanwhile, the government has not yet appointed commissioners in the NNRFC, which has a critical role of advising government on distribution of resources as per the constitution of the country.
Speaking at a function in Kathmandu recently, NNRFC Secretary Baikuntha Aryal argued that both sub-national governments will have to provide services to their people, and hence population has been given due priority. The government is advised to allocate resources accordingly.

“I think population should be given maximum 50 percent weightage. Local levels of remote areas which have lower population need more resources to afford costlier development activities,” said Devkota, who feared formulas made haphazardly will have negative impacts. Asked why HDI, the indicators of social and economic development, has been given very low weightage, Aryal argued that there are other grants to meet the needs on those indicators.

“We have given much emphasis on population as India had done initially, but we will shift the emphasis after some years and provide more grants for the provinces of lower population growth, as India has done in some states recently,” added Aryal, who said they faced dearth of data of all the new local levels and provinces in devising formulas.

Likewise, the constitutional body has also set different weightage on distribution of equalization grants, one of total four such grants, mainly meant for balancing overall grants distribution to provinces and local levels.

In its formula, NNRFC has advised the government to count 60 percent weightage on the gap between need of regular expenses and internal revenue generation of local levels and provinces, while 15 percent values are given for human poverty index and indicators of social and economic discrimination each. NNRFC has prepared separate indicators of need of expense and revenue generation and social and economic discrimination.

The remaining 10 percent is allotted for infrastructure indicators, which includes availability of road, electricity and access to information technology in both sub-national governments. But the document has not disclosed values of each of the three indicators accounted. Aryal said that they have used data from different statistics of Central Bureau of Statistics.