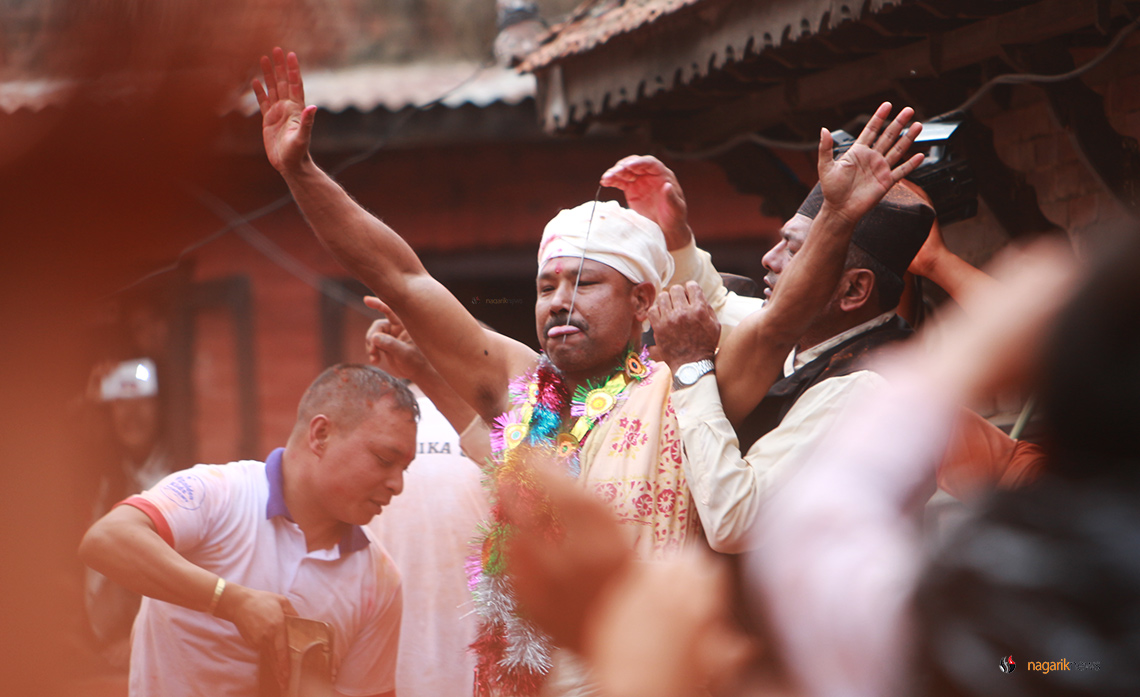 BHAKTAPUR, April 15:  Buddha Krishna Bag has pierced his tongue in front of a huge crowd of participants observing Bisketjatra at Bode in Madhyapur Thimi Municipality on Saturday.

Buddha Krishna, a local of Bode, got his tongue pierced at Bode Higher Secondary School near Layaku Chowk amid a rapturous applause today.

This tongue piercing festival is observed on Baisak 2 every year.

Krishna Chandra Bag Shrestha pierced Buddhakrishna’s tongue with a one-foot-long iron spike amidst traditional music before he was brought to Layaku Chowk by a musical band.

With the spike lodged in the tongue, he was taken round various places before taking the spike out of his tongue in front of Pancho Ganesh.

The tongue does not bleed. It the tongue bleeds while piercing, it is taken as an indication that something bad would happen, said Juju Bhai who has taken part in the tongue piercing festival for eight consecutive time.

This is the fifth time Buddha Krishna Shrestha took part in the tongue piercing festival.

Krishna Chandra, brother of Buddha Krishna, had got his tongue pierced for 12th consecutive time.

According to the record, Bekhanarayan Haya Shrestha has got his tongue pierced for 32nd time, the highest ever.

The tongue piercing festival had started during the Lichchhabi dynasty.

KATHMANDU, Sept 30: The Bijaya Dashami festival, observed on the 10th day of the waxing moon in the month of... Read More...