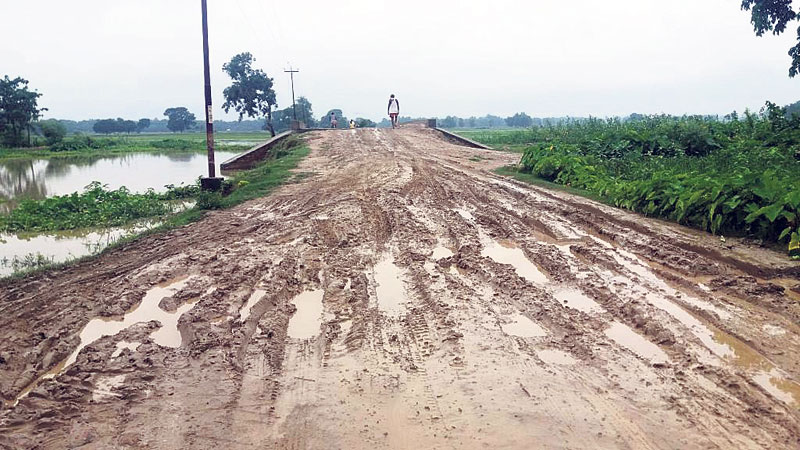 The Rajbiraj - Khurhuriya road section of Hulaki Highway. In lack of timely repairs and upgrades the road has been muddy and slippery making it very risky for vehicles to ply through it. (Jitendra Kumar Jha/Republica)

RAJBIRAJ, Aug 15: has been over a decade that heavy vehicles have not been seen in the first-ever blacktopped Rajbiraj - Kunauli road in Saptari district. The road is simply not in condition for heavy trucks and buses to ply over it.

Recently, the road section has got even uglier after Khado River changed its course. With the river taking over the road as its new course, the road has now almost disappeared. This has added to the locals' worry as the road is a major transportation link. They feel that government's apathy towards upgrading the road and preserving it from the floodwaters has cut them off from other parts of the country.

Locals feel that despite being one of the oldest roads of the country that joins road networks to dozens of VDCs of Saptari district, Hulaki Highway has not received due attention from concerned authorities and politicians. “It's not that the politicians and officials don't discuss plans for upgrading the road. They do. But it's just limited to discussion. The plans have never been implemented,” says Mahakant Thakur, priest of Chhinmasta temple. “We have taken to streets several times demanding upgrades for the road. And these protests have been participated and supported by commoners, journalists and other professionals. The assurances these protests received time and again by concerned authorities, have not been translated into action so far. They continue turning deaf ear to our plights,” he said.

Hanumannagar - Bhardhaha road section, one of the most important road sections in Saptari that joins the East West Highway has been in dilapidated state for a long time, Thakur said. “Since 15 years the road is in dire need of upgrade. But the road department has always neglected it.”

It is not there have been any upgrades on the road. Some sections of the road were blacktopped during these years. But they were of utterly poor quality and gave in to early. Within some weeks of blacktopping, the newly added blacktopped layers detached from the road surface and the road returned to its old state, locals informed. Ram Narayan Yadav, president of Chhinnamasta Temple Development Committee, stated that use of low quality construction materials complimented by negligence of concerned monitoring authorities have been the primarily responsible for such poor quality road upgrades.

“To be precise, there is no single road in Saptari that's in good condition,” said Than Singh Bhanshali, president of Civil Society, Saptari. “May be we can say, Saptari is a district without roads,” he added.

Stating that transportation is the backbone of development in any given society, he alleged that the government of being extremely apathetic towards development of the district and entire plain region. He added that despite spending millions of rupees under the heading road development, the results have not been pathetic and this, he claimed, is due to the negligence of concerned authority.

District Develop Committee and Road Department, among other stakeholders' record show that around Rs 500 million have been invested for road in Saptari in the last two years.

In the last Constituent Assembly election, issue of the road repairs and upgrade was in high priority of every political party. Every leader 'wanted to change the face of Madhes' by upgrading road networks the region. However, since the election, none of the political parties have looked back.

During this period politicians have switched to many other priorities but road upgrade has not been seen anywhere, Shyam Prasad Sharma, a local of Madhepura village in Saptari, shared. “Promises made by the politicians during the CA elections have been forgotten. Hulaki highway was a priority for all politicians during election campaign, but those promises have been since forgotten,” he said.

Harinarayan Shah, a businessman from Malekhpur - 5 stated that monsoon comes as nightmare for the people of Saptari. The roads simply give in and plying over them is a nightmare.

“During the rainy season, water makes the entire road so muddy that let alone vehicles, even commuters cannot walk over them,” he commented.

“It is very risky to commute through these roads. If you do commute than you put your life at risk. They are very muddy, slippery and full of potholes,” he added.

Shah said that cycles, motor bikes, jeeps, carts, tractors, auto rickshaw accidents have been common on these roads. Many have died and many have been injured in the last few years. “Each day, thousands of people use those roads. The roads are in extremely poor conditions. Many die, many get injured while plying on these roads, and yet the government remains apathetic towards it,” he said.

“Our representatives from here have reached to the posts of ministers and other high levels, but they do not remember anything else than their own vested interest once they get into the position. Nobody cares for the plight of commoners like us,” remarked Raju Chaudhari of Chapena - 4.

ILAM, Dec 27: Ilam’s poor road has been affecting the tourism industry along with the resident. Locals are worried that if... Read More...

RAJBIRAJ, March 5: As the local election nears, incidents of aggression between the pro-election UML and the opposing UDMF are increasing... Read More...