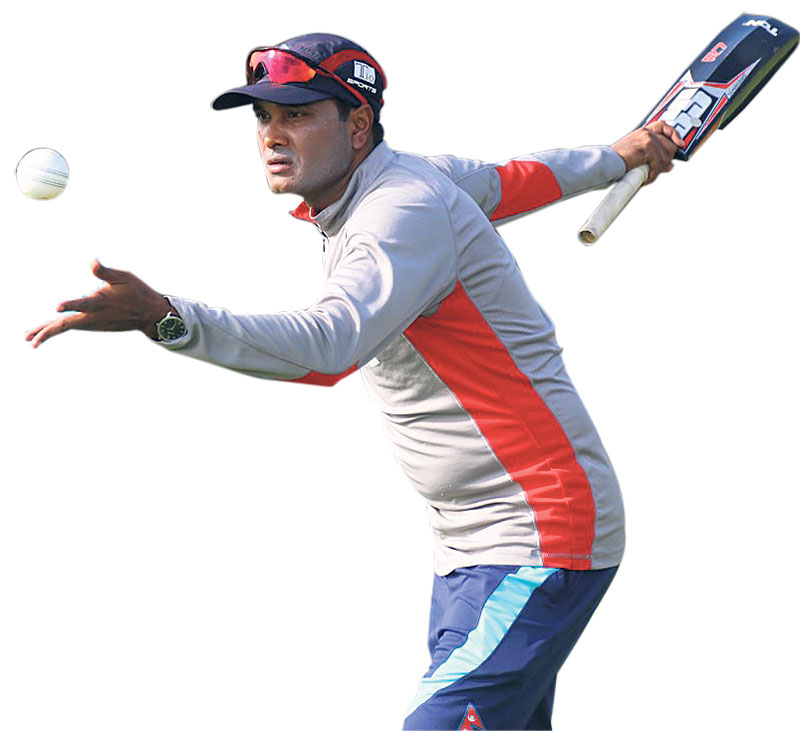 Since the Nepali batsmen had performed well during the practice matches in India before leaving for Singapore to take part in 2018 ICC U-19 World Cup Division 1 Asia Qualifier, Das was hopeful of his players replicating similar performance there.

However the youth batsmen performed miserably from the first match through the last match, compelling Nepal to wrap up the qualifier in the second position behind Afghanistan.

Although Nepal defeated home team Singapore and Malaysia easily, suffering losses to Afghanistan in both matches of the qualifier held in double round robin league format did not help.

The individual highest score from Nepali batsmen in the tournament was 54 runs, struck by Dipendra Singh Airee against home team Singapore in the second leg clash.
A day later, Rohit Kumar Paudel scored 34 runs against Malaysia which was the second highest figure from the Nepali batsmen throughout the competition.

“Batting was hugely disappointing; in fact it was unexpected. We failed to play as per the plans,” said Das when asked about the reason behind not being qualified for the world cup to be held in New Zealand next year.

“The batsmen did not give expected individual performance, neither were they able to build up good partnership,” he said.

“We had worked hard on batting during the India stay. We also played practice matches against good teams where players made decent runs to win three out of five,” added Das: “But the same batting form wasn’t replicated in Singapore. We failed to make big runs, which we were supposed to do.”

During a month-long stay in India, Nepal had defeated Friends Sports Academy by 121 runs in the first practice match, followed by the victories of 249 runs and 60 runs over Gurugram Sports Club and RP Singh Academy, respectively.

Nepal then faced 68-run defeat to Noida XI in the last match while in the other match against it, Nepal was washed out.

“Our target in the first two matches was to win them with big margins in order to have a decent run rate. But we couldn’t bat properly and eventually players started to feel pressure, which didn’t help us in the remaining matches,” Das added.

“To solve the batting woes, I changed the batting order in rest of the matches. We even provided counseling to them, but it also couldn’t bring back the players’ confidence.”

However, Das said that the fielding of the team was a consolation for him. “Our fielding was very good. I take it as a big relief for a disappointing tournament,” he said.

Meanwhile, Das appreciated the bowlers’ performances. “Sandeep was outstanding, and so were other bowlers. They contributed well from their side,” he said.

Skipper Sandeep Lamichhane who claimed 24 wickets was declared as the highest wicket-taker.  He was supported by Shahab Alam and Pawan Sarraf who pocketed 12 and eight wickets respectively.

Before leaving for India, Das had said that his team would be the one with the poorest preparation among all the participating nations in the qualifier.

He was pointing toward the Afghani players who ‘got chance of playing enough cricket’.

On the other hand, Singapore and Malaysia had a proper domestic structure for cricket, he said.

“I am not trying to blame anyone for this failure but we have to look at the other teams,” he said: “Afghani young players got chance to play for seven to eight months. Singapore and Malaysia have proper domestic structures. But we don’t have anything like that.”

“Our young players hardly get to play one tournament in a year and it does not help nurture their talents.”

Former national team captain Das was stressing on the need of proper domestic infrastructure for cricket and opportunity to play enough tournaments.

“As we know, there is no cricket board in the nation at the moment. So there is no one to create such environment. So long as this issue exists, the woe will continue as these things are connected with each other,” Das concluded.

SINDHULI, May 15: The random extraction of sand, aggregates and stones in the Sunkosi River is not only taking a... Read More...

Chile's high-octane style of play has made them one of the world's most entertaining teams to watch but coach Juan... Read More...