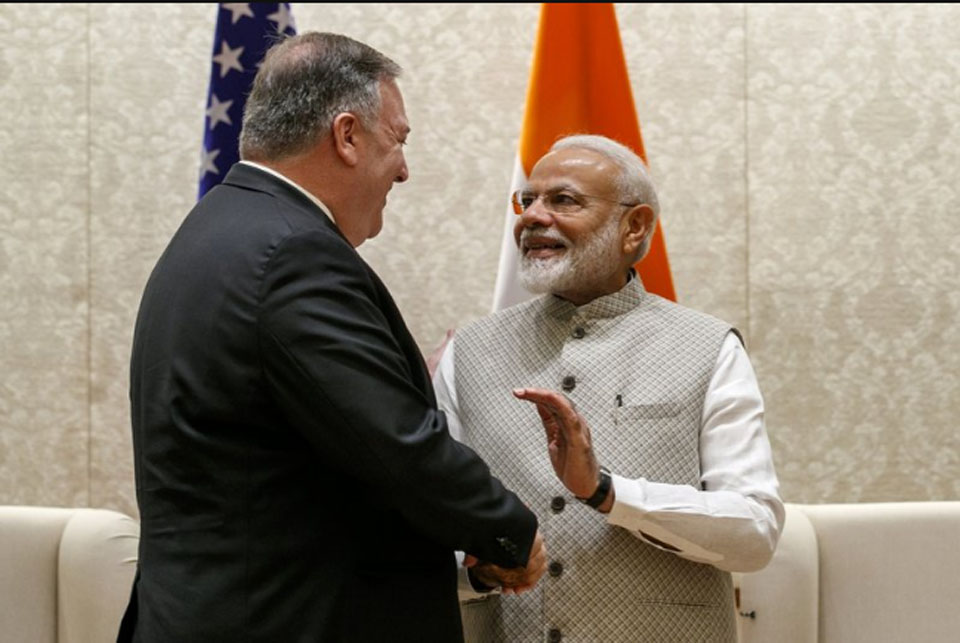 NEW DELHI, June 26: U.S. Secretary of State Mike Pompeo began official meetings in India’s capital on Wednesday amid growing tensions over trade and tariffs that has strained the partners’ ties.

Pompeo called on India’s Prime Minister Narendra Modi on Wednesday morning. No details were immediately disclosed about their almost an hourlong meeting. Pompeo is later scheduled to meet his counterpart S. Jaishankar.

Pompeo arrived in New Delhi late Tuesday after visiting Saudi Arabia, the United Arab Emirates and Afghanistan on a trip aimed at building a global coalition to counter Iran.

His visit is the first high-level engagement between the two countries since Modi’s reelection last month. The countries call each other a strategic partner despite retaliatory tariffs they imposed on some of the other’s goods this month.

The visit also comes ahead of the scheduled meeting between President Donald Trump and Modi on the sidelines of the Group of 20 Summit in Japan later this week.

Indian officials say they have little differences with the U.S. over political and strategic issues including on Iran, but they have cautioned the two countries need to be careful on trade and commerce.

Before Pompeo’s arrival in India, hundreds of supporters of left-wing groups marched in central New Delhi to protest his visit and denounce American policies in the Middle East. The protesters held banners reading “No war on Iran” and chanted slogans such as “Hands off Iran, hands off!” and “War mongering America, down down.”

They urged the Indian government not to cut off imports of oil from Iran, as the U.S. has demanded.