Polls in Province 2 deferred yet again 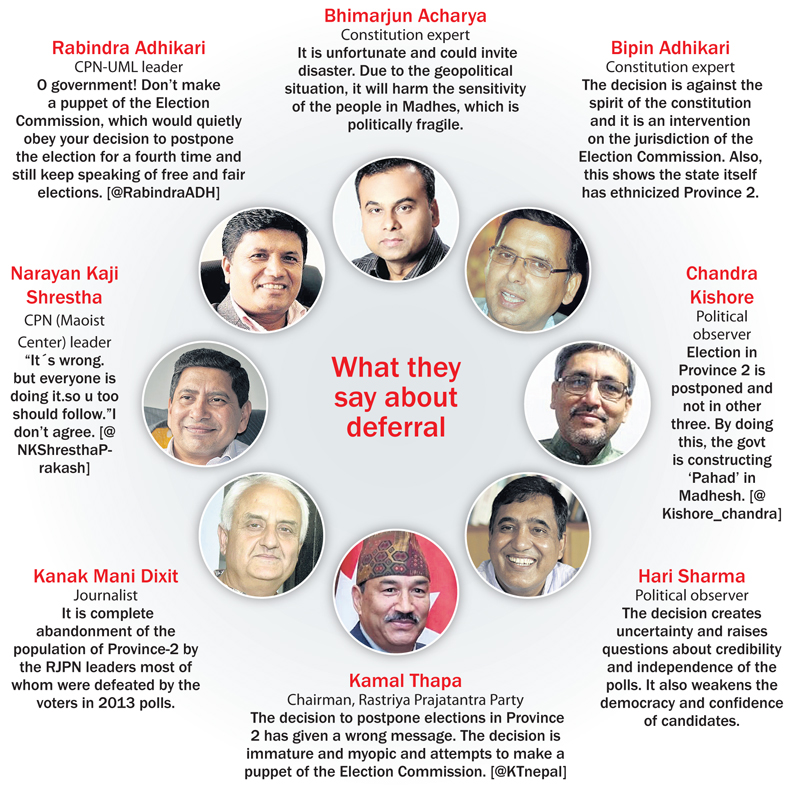 The election in  Province 2 has been re-scheduled for September 18. Other programs designed for second round  elections in Provinces 1, 5 and 7 have also been changed without however affecting the poll date of  June 28.

Immediately after  rounds of meetings with the ruling parties and the election commissioners, a Cabinet meeting  decided to defer the polls in Province 2 and change the election calendar  in the three other provinces. “Elections in Province 2 will now take place on September 18 and the polling in the remaining provinces (1, 5 and 7) will be conducted as scheduled although the poll-related calendar has been revised without impacting the polling date,” said  Minister for Labor and Employment Farmullah Mansoor after the meeting.

They have stood in favor of conducting the election as scheduled and not deferring it under any pretext. “We walked out of the meeting after saying that the Election Commission was committed to holding the elections as scheduled, in the context of all poll preparations being complete and the home ministry assuring  full security,” said Election Commissioner Narendra Dahal.

Chief Election Commissioner Ayodhee Prasad Yadav and the other commissioners had advised the government to let them conduct the elections as scheduled.  “Poll deferral was not our suggestion. Instead, we suggested the government  make the scheduled poll a success at any cost. But they went against our suggestion as  they have the authority to fix the poll date or  to defer it,” said Election Commissioner Ishwari Prasad Paudyal, adding, “We remain helpless at this moment.”

Despite  strong reservations over the government decision, the election body has revised its election calendar again.  “We have no  option but to abide by the government’s decision. Candidacy nominations for three provinces have been deferred for Sunday,” said CEC Yadav.

Previously, the candidacy nominations were set for Friday. Other election-related programs have also been adjusted in the three provinces in accordance with the government decision, but without affecting the poll date.

This is the fourth poll deferral. Initially, the government had fixed May 14 as the poll date across the country. Just ahead of nominations day, the government decided to conduct the elections in two phases. Three provinces of the hill region went to polls in the first phase and June 28 was set as the  poll date for the second phase.  Provinces 1, 2, 5 and 7, which largely lie in the southern plains, would vote in the second phase.

Ruling party leaders have defended Thursday’s decision to defer the poll. They said the decision was taken to end the ongoing Madhes crisis and bring the poll-opposing forces on board the election process. “It will now end the political crisis and poll-opposing parties will also participate in the election,” said Minister Mansoor.

Mansoor claimed that the poll-opposing leaders have agreed to contest the June 28 elections in the capacity of independent candidates and there would not be any difficulties  holding elections in Province 2 once they participate in that fashion in upcoming polls.
Poll observers, however, said the decision has complicated the polls, raising uncertainty over the three sets of polls-local, provincial and  parliamentary- that need to be completed by January 2018. Poll-opposing Rastriya Janata Party leaders said they are not contesting any election unless the constitution amendment is endorsed. Further, they have threatened to launching fresh programs to obstruct the polls in the three provinces.

KATHMANDU, June 13: Arguing that it would be difficult to hold the second phase local elections without bringing the agitating... Read More...

KATHMANDU, May 31: The cabinet meeting on Wednesday morning has formally decided to hold the second phase of local level... Read More...