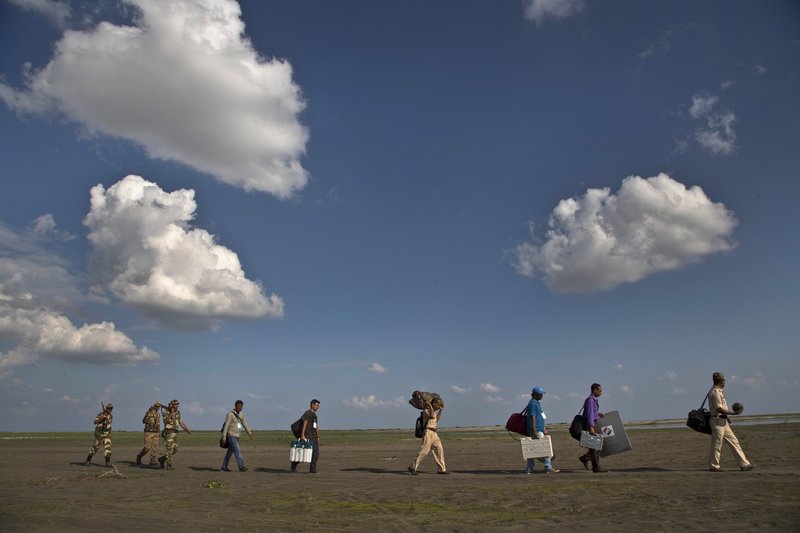 In this April 10, 2019, photo, Indian election officials and paramilitary soldiers with election materials walk along the river Brahmaputra to board on a country boat on the eve of the first phase of general election in Majuli, Assam, India. (AP Photo/Anupam Nath, File)

Such numbers convey the scale of the world’s biggest democratic exercise. But its smaller numbers that show India’s commitment to reach every voter, no matter how remote.

In India’s six-week marathon election that began this week, the Election Commission has ruled that no voter should have to travel more than 2 kilometers, or just over a mile, from their home to cast a ballot, whether they live on a Himalayan peak or an island in the Bay of Bengal.

The polling booth in Gir Forest National Park in Gujarat is set up for the sole human inhabitant, a Hindu priest who lives among the lions. Polling officials hike for a whole day to reach the remote village of Malogam in Arunachal Pradesh, where just one woman is registered to vote.

Poll workers must be in superb physical condition to cross mountains, rivers, deserts, forests and national parks. The work entails arduous journeys by train, road, helicopter and boat, accompanied by porters who carry the briefcase-sized voting machines, registers, ink and other election paraphernalia on their backs.

In Arunachal Pradesh, a state in India’s northeast that borders Bhutan, China and Myanmar and where voting took place Thursday, most polling stations are located inside dense, Himalayan forest.

Poll workers set off a week before the vote. The first leg of the journey was a three-hour drive from Changlang, a district in the east, to the city of Maio, a tourist destination 100 kilometers (62 miles) away.

From Maio, the next stop was Vijoynagar, some 163 kilometers (101 miles) away, via the Namdapha National Park. No road connects the two towns, and the terrain is subject to frequent flash floods and landslides. Journeys here are measured in days rather than hours.

So, the team reached Vijoynagar by Indian Air Force helicopter. In pre-monsoon time, bad weather can force the pilot to abort several attempts. That’s why a week’s leeway is given to the team. If all else fails, it’s six days to reach Vijoynagar by foot.

From Vijoynagar, the caravan walked the final leg of their odyssey to the polling station of Gandhigram. It is only 12 kilometers (7.5 miles) from Vijoynagar but the trek takes eight hours, through eerily dark jungles where no sunlight steals through the canopy and under constant threat of an ambush by a herd of elephants.