Polish democracy in the crosshairs 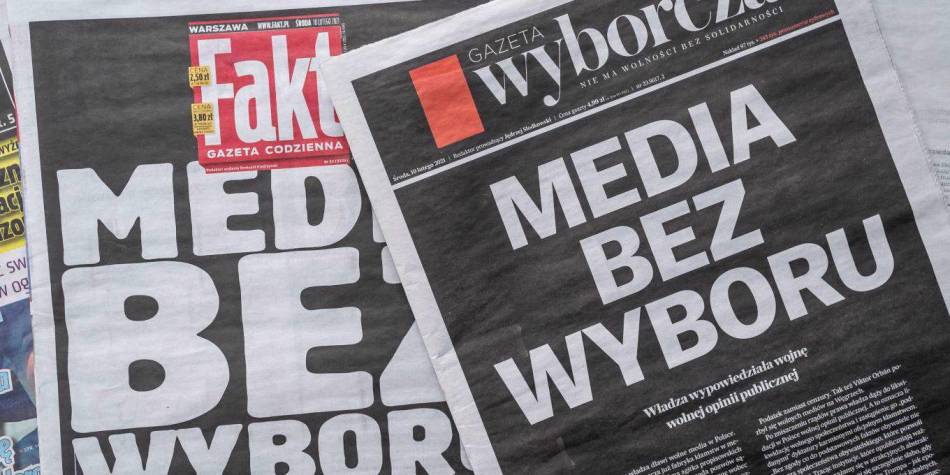 Thirty years after the fall of the Berlin Wall, the abolition of censorship, and the collapse of the Soviet Union, Poland’s civil society is again defending its hard-won democracy from a state determined to do away with it.

WARSAW – There has been nothing like it before in Poland. On February 10, newspapers and magazines suspended publication, news websites went dark, and dozens of radio and television stations ceased broadcasting. Thirty years after the fall of the Berlin Wall, the abolition of censorship, and the collapse of the Soviet Union, Poland’s civil society is again defending its hard-won democracy from a state determined to do away with it.

The policies Poland’s independent media outlets are now protesting have made them as vulnerable as their counterparts in Russia and Hungary. In fact, as Deputy Prime Minister Jarosław Kaczyński, Poland’s de facto ruler, has publicly admitted, the template for his regime is that of Hungary under Prime Minister Viktor Orbán. So, to understand the Polish media’s protest of silence, the Hungarian experience is worth recalling.

After returning to power in 2010, Orbán, determined to consolidate what he called an “illiberal democracy,” relied on the “salami” tactics invented by Mátyás Rákosi, the so-called Hungarian Stalin, to establish communist rule after World War II. In the fight against the “class enemy,” Rákosi’s Communists methodically diminished free institutions, slice by slice, until nothing but the casing remained. Orbán adapted these tactics for the twenty-first century, and Kaczyński has followed him.

The first slice, then and now, was the public media, which has been turned into a mouthpiece of Kaczyński’s ruling Law and Justice (PiS) party. Poland’s official news outlets now peddle a steady stream of lies and slander, reminiscent of master propagandists like Joseph Goebbels and Andrei Zhdanov. The Constitutional Tribunal, the prosecutor’s office, and cultural institutions were next to be politicized and subordinated to the ruling party. Bit by bit, a democratic state ruled by law was transformed into an authoritarian Potemkin village.

Following the lead of Russian President Vladimir Putin and Orbán, the PiS is no longer satisfied with control of public media and the fealty of pro-government websites and newspapers, and is turning its attention to strangling independent news outlets. Falsifying history and concealing corruption scandals is not enough. The string of lawsuits – sometimes by the government and sometimes by individuals or groups at the government’s behest – against critics of the government is not enough. All media organizations that are not under the PiS regime’s control, and that do not serve its interests, must be destroyed.

Viewed against this background, the regime’s planned advertising tax, which triggered the current round of media protests, is yet another slice of the salami. The tax is not just a heavy, discriminatory financial burden, but also a weapon to stifle criticism and free speech.

The survival of most independent news outlets depends on advertising revenues, which have already plummeted in a pandemic-ravaged economy. Depriving these outlets of even more income will force them to lay off journalists and cut budgets for core tasks, like fact-checking government statements and conducting investigations of official wrongdoing. To add insult to injury, the revenue from the advertising tax is to be transferred to the pro-government media.

The government’s claim that the tax primarily applies to America’s tech giants, which avoid paying levies on their turnover in Europe, is an obvious lie. The PiS government, utterly servile to former US President Donald Trump, actually declined to tax the tycoons of Silicon Valley. Moreover, collection of such a tax would have to be agreed by many countries, particularly those within the European Union. Poland has no chance of being effective against the US tech giants without the EU, from which the PiS government is estranged.

The PiS regime’s attack on the economic underpinnings of free media is no less an assault on democracy than the January 6 storming of the US Capitol by Trump supporters. Behind both are lies, violent rhetoric, and the perversion of politics and public life. The PiS government, too, has demonstrated its contempt for the rule of law and human rights, to say nothing of independent media. The evidence is a plethora of government scandals, widespread corruption (including in the fight against the pandemic), the transformation of school curricula into nationalist kitsch, and the use of the police as a tool and as bodyguards of the PiS regime.

At the root of such policies—wherever they are adopted—is not only fear of freedom and truth, but also the desire to instill this fear in our societies. All Polish courts are to be as controlled as those in Moscow, which can try, convict, and sentence the Kremlin’s opponents in record time, as the recent case of Alexei Navalny demonstrated. All Polish media are supposed to speak with one voice, like those praising Putin or Orbán.

A colleague of mine, an insightful observer of contemporary politics, told me: “As an analyst, I will tell you that they, the enemies of freedom, could win. As a citizen, I will ask you to promise me that you will do whatever it takes to prevent that from happening.”

I replied: I promise.

Adam Michnik, a leader of Solidarity in 1989 and a participant in the round-table talks that ended communist rule in Poland, is Editor-in-Chief of Gazeta Wyborcza.

Violence against women sees spike in Suklaphanta Municipality
34 minutes ago