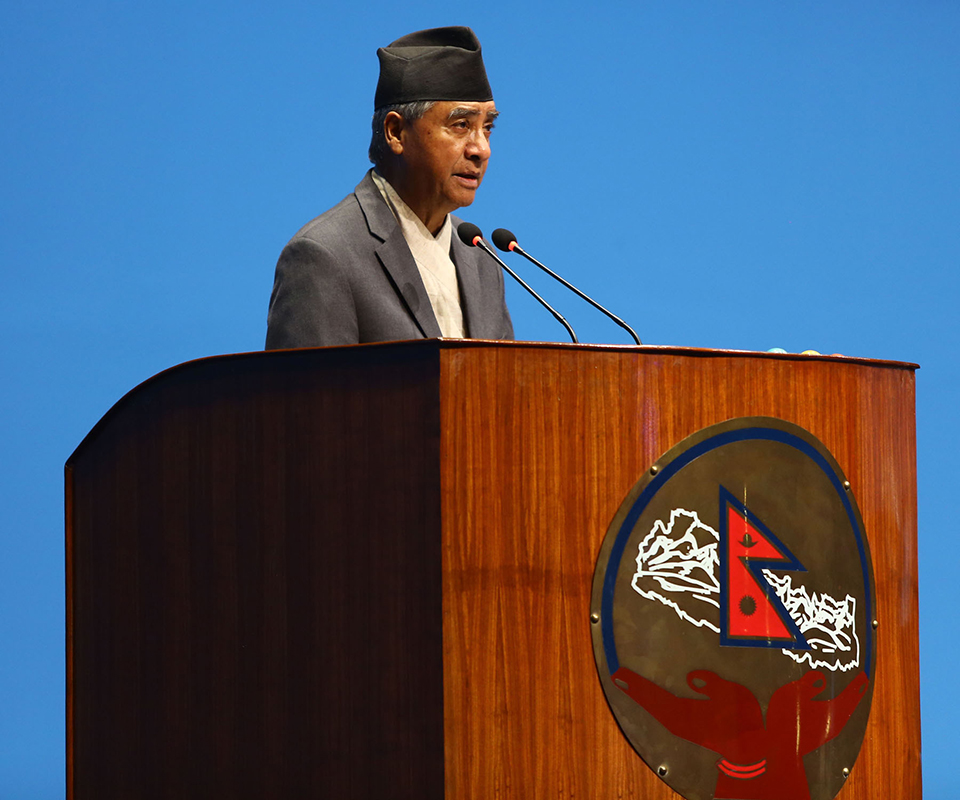 KATHMANDU, May 6: The main opposition party, Nepali Congress (NC), has claimed that the government's policy and program for the new fiscal year 2019/20 will not deliver any concrete results, as the document contains scattered plans without any clear vision.

Taking part in the deliberations on the policy and program in parliament on Sunday, NC President Sher Bahadur Deuba and other leaders claimed that the document has failed to draw a clear vision of development and prosperity in the country.

“I have taken the government's policy and program as a collection of scattered, unjustified and unprepared wishes. It is certain that the policy and program will not deliver any result this year like in the last year,” Deuba said in the House of Representatives.

The chief of the main opposition also criticized the government document for including populist projects without identifying the resources for their implementation. “While on the one hand, the government has failed to draw a clear plan for a year, it has on the other hand promised a double digit economic growth for the next 25 years. This is not possible with the current working style and intention of the government,” Deuba said.

A four-time Prime Minister, Deuba alleged that the government was presenting some of the projects initiated by previous governments including his own in the past as if they were KP Oli's own visions. The opposition leader also flayed the government for curtailing the press freedom and breaching the jurisdiction of the constitutional bodies through amendments to laws.

Also, criticizing the use of the phrase 'my government' by President Bidya Bhandari while presenting the government's policy and program, NC President Deuba accused the government of dragging the head of state into controversy by asking her "to address parliament like the British queen." “The government has deliberately dragged the president into controversy by asking her to address the House like the British Queen. This is not a good sign for our republic,” he added.

Most other NC leaders participating in the deliberations echoed Deuba. NC leader Minendra Rijal urged the government not to drag the president into controversy by presenting her like a monarch on different occasions. “The people have started casting doubts over whether the government will retain the republic,” said Rijal.

NC lawmakers Dila Sangraula, Dilendra Prasad Badu and Prakash Rasaili, among others, criticized the policies and programs for offering hollow dreams instead of tangible plans to achieve development and prosperity.

Ruling Nepal Communist Party (NCP) lawmaker Agni Sapkota pointed out the false promises of controlling corruption in the policies and programs by the government. “Corruption will not be eliminated without destroying its roots. I strongly demand a parliamentary probe into the public land encroachment across the country or the formation of a high level commission,” said Sapkota.

Sapkota also vented his ire over the use of “my government” by President Bhandari. “Our unique standard should not be breached in the name of international standards,” said Sapkota.

The opposition leader also vented his ire on "the use of a controversial phrase akin to the monarchs in the past by the president." Rajendra Shrestha of the ruling Federal Socialist Forum Nepal (FSFN) also objected to the use of the phrase "my government" by the president while reading out the government's policies and programs. The government has planned to endorse the policies and programs by Tuesday, before Prime Minister Oli embarks on a visit to Vietnam and Cambodia.