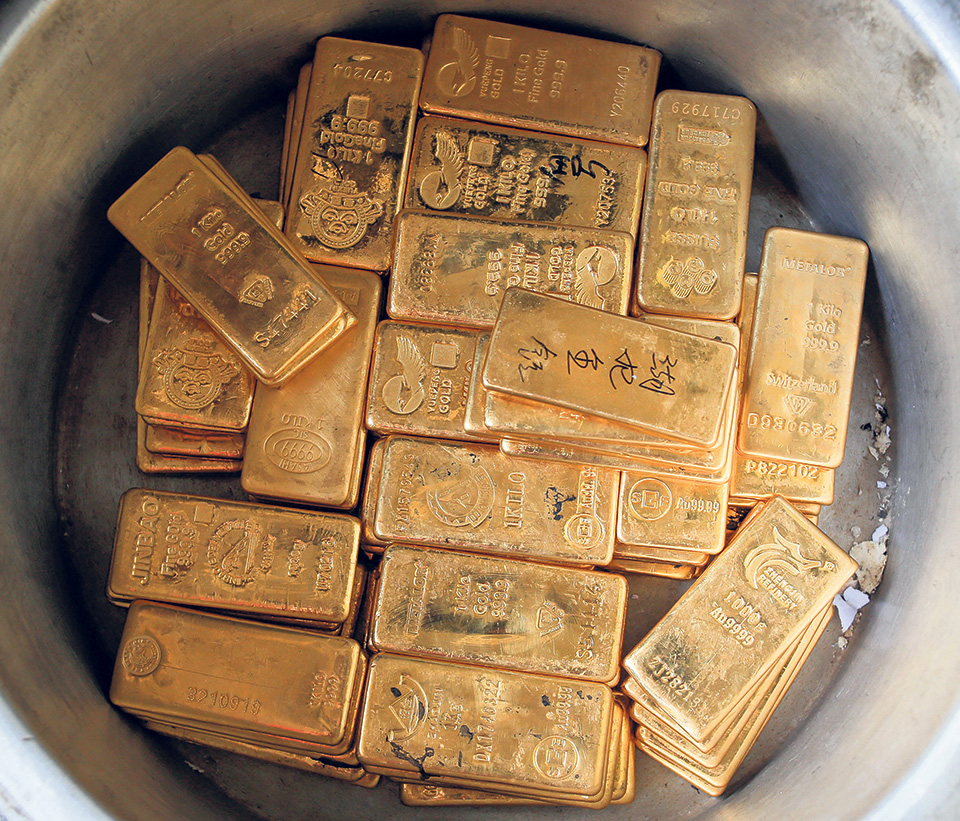 KATHMANDU, September 4: The Metropolitan Police Crime Division (MTCD) has busted 'an international gold smuggling racket' from the capital in what officials described as one of the largest seizure of illegally held precious yellow metal.

On the wee hours of Monday, a team of MTCD personnel intercepted a car (Baa 17 Cha 6427) at Chhetrapati near Thamel and seized 88 kilos of gold. One Manoj Adhikari, who has been identified as the driver, was also arrested during the raid.

Police have not disclosed much details about the raid and the smugglers. MTCD officials said that that the raid was carried on tip-off provided from the insiders of the smuggling racket.  They suspect that the gold was smuggled via Kerung entry point of Nepal-China border and was being taken outside Kathmandu.

In a press meet organized to inform about the raid, Superintendent of Police Dibesh Lohani said that they have started investigation on Chinese nationals who he said were the "owners of the gold”. He, however, refused to divulge further details of the smugglers or their nexus in Nepal.

Police have been making one after another big seizure of smuggled gold following change in command of the MTCD and the Central Investigation Bureau (CIB).  Monday's raid was the second major raid held within a week. Five days ago, the CIB of Nepal Police had seized 18 kilos of gold from the capital. The gold was also smuggled through Kerung entry point, according to officials involved in the investigation.

"All the gold that enters Nepal except from air route comes from China. This seizure has proven that there are more smuggling rackets than we had thought of and the nexus is much bigger," said CIB Chief DIG Pushkar Karki, adding that they were looking into traces of possible links between the two recent seizures.

DIG Karki said that they were also investigating into the Nepalis involved in the smuggling rackets.

"The smugglers don't operate on their won. There is a big nexus supporting them," said Karki.

Despite the claims of police that gold smuggling had slowed down after the seizure of 33 kilos of gold from Tribhuvan International Airport in January, Wednesday's bust of 88 kilos of gold has come as a reminder that gold smuggling has been occurring in the same frequency. Several government officials including Nepal Police SP were arrested in connection in the that case.

Officials said the quantity of the gold seized in the last one week has indicated that the gold smuggling racket is much bigger and stronger than they previously thought of. They claim that Nepal might be turning into a hub for smuggling gold to India.

However, it's early to say whether the smuggled gold was being sold in the internal market or being smuggled to India. Many gold traders in Nepal use smuggled gold as they come in much cheaper price. This practice has led to heavy decline in consumption of gold that Nepal Rastra Bank sells.

Though laws in Nepal allow its citizen and foreign nationals to bring gold from abroad, gold smuggling has become widespread due to high customs duty on the bullion.

Police seize cows being smuggled across the border

MAHOTTARI, May 6: The law enforcement officials in Mahottari last night took under control cows and calves being smuggled across... Read More...