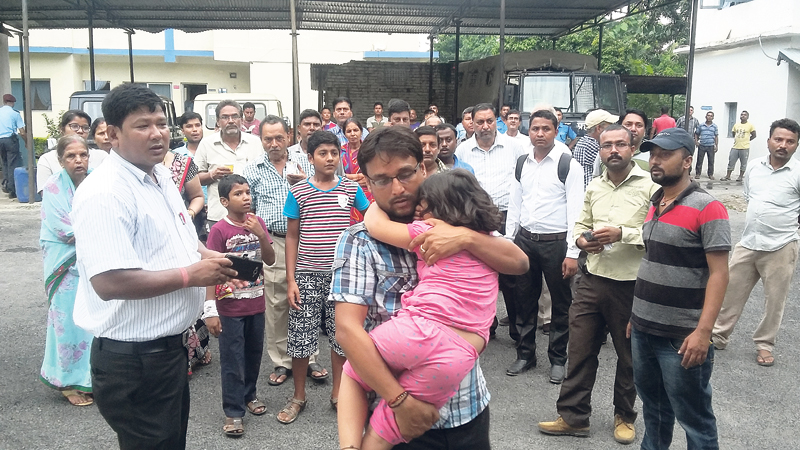 Kidnapped five-year-old girl Sparsha Agrawal of Bihar, India is reunited with her father after she was rescued by Nepal Police from a house in Pathari in Morang Monday. (Ajit Tiwari/Republica)

BIRATNAGAR, Aug 9: Sparsha Agrawal, a 5-year-old girl from Kurshela, Bihar was sleeping in a house in Pathari of Morang early Monday morning when security officials in plainclothes entered the house and rescued her from her abductors.

Sparsha was kidnapped from Kurshela of Katihar, Bihar while returning home from school on Wednesday. Since then, she had been held captive at a house of Rita Sah in Pathari.
Acting on a tip-off, police barged into the house in the wee hours on Monday and rescued the girl. Apart from rescuing the minor, police also arrested Dinesh Gupta of Inaruwa, Sunsari on suspicion of his involvement in the kidnapping.

“Gupta was sleeping next to the girl when our rescue team barged into the house to rescue her,” said a police officer involved in the rescue operation.

Sparsha's father used to drop her to school in the morning while she returned home on a school bus in the evening. On Wednesday, while the girl was returning to her home, three people in a van stopped the school bus in midway. A person familiar to Sparsha emerged from the van, entered into the school bus and took her along saying he would drop her to her house.

“The person who took my daughter from the school bus was a previous school bus driver, Mithun Paswan,” said Sparsha's father Bhanu. The Bihar police has already arrested Paswan.

Along with Paswan, the Bihar police has also arrested Santosh Yadav, the son of former member of Indian parliament Naresh Yadav and Sunil Singh, a local of Katihar, Bihar in relation to the kidnapping.

DIG Keshari Raj Ghimire, chief of Eastern Region Police Office, said the rescue team worked continuously for 18 hours. “Our team raided six houses in Dhankuta, Sunsari and Morang before rescuing the girl from the house in Pathari,” he said.

He said that a joint team comprising officials from Sunsari and Morang districts was formed to carry out the rescue operation.

Speaking in a press meet organized by the regional office after the rescue operation, Bhanu said that the kidnappers did not demand any ransom for the return of the kidnapped girl.

However, news published in various Indian newspaper reported that the kidnappers had demanded Rs 250 million in ransom.

SARLAHI, June 7: The District Police Office, Sarlahi has rescued a seven-year-old boy who was abducted from Barhathwa of Sarlahi district... Read More...