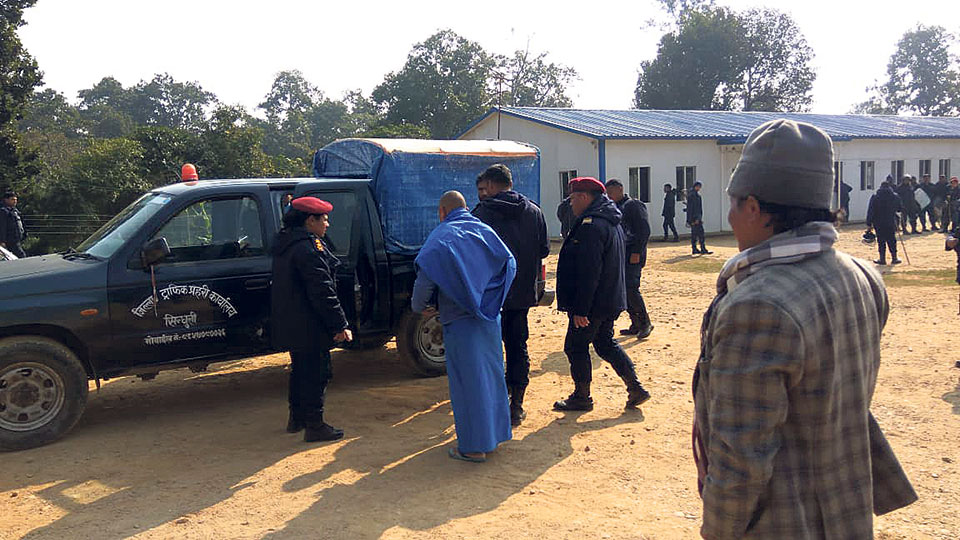 Police taking into custody a follower of Ram Bahadur Bamjan for interrogation at Bomjan’s ashram in Sindhuli on Friday. Although the police had gone to the ashram Friday to arrest Bamjan, who has been accused of raping and disappearing his disciples, he could not be found there. Photo: Anil Bhandari/Republica

SINDHUPALCHOWK, Feb 8: Police raided the ashram of Ram Bahadur Bamjan in Sindhuli district on Friday,  but returned empty-handed. The ‘self-proclaimed god-man’  was not to be found there.

A team of police from Sarlahi, Sindhuli  and the Central Investigation Bureau (CIB) reached the ashram at 6 am Friday, but Bamjan was not found, according to the police. Bamjan is accused of raping his disciples at the ashram and murder.

According to Superintendent of Police Ranju Sigdel, chief of  Sindhuli District Police Office, a case has been filed against Bamjan accusing him of rape. He said a police team has been deployed since Friday morning to nab  Bamjan.

When police reached the ashram, only a few of his disciples were there.

Bamjan has not attended any public function since family members of those who have gone missing from his ashrams filed complaints at various district police offices in the last week of December 2017.

Bamjan and his supporters have been accused of disappearing at least five followers of the godman who were living in his ashrams. Two of them – Sancha Lal Waiba and Rita Bot – were allegedly murdered and subsequently disappeared from Bamjan’s previous ashrams in Sindhupalchwok and Sarlahi.

Some pictures from Teku Hospital: Patients are treated at corridors as hospital runs short of beds
22 hours ago

69 including 15 lawmakers of federal parliament test positive for COVID-19, one succumbs to the virus
7 hours ago
Wide-body plane flying to Beijing to bring oxygen cylinders
8 hours ago

How the U.S. locked up vaccine materials other nations urgently need
7 hours ago

Some pictures from Teku Hospital: Patients are treated at corridors as hospital runs short of beds
22 hours ago