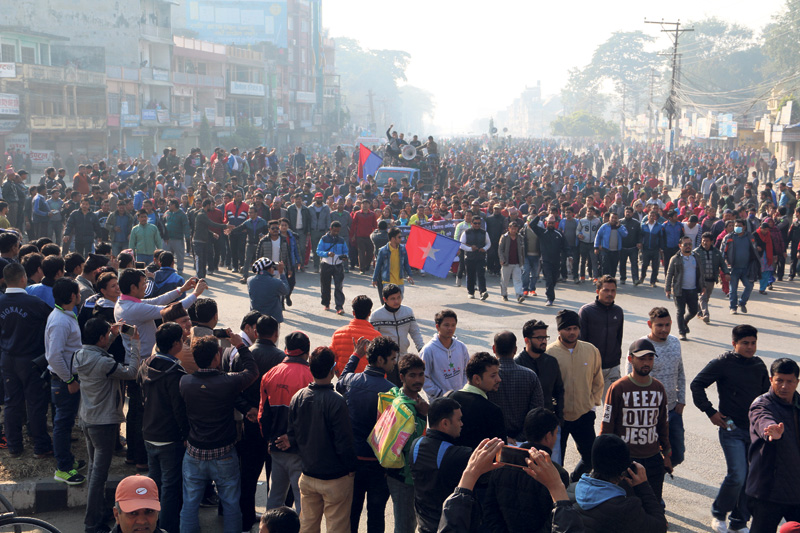 Probe team formed to investigate the incident
BUTWAL, Dec 21: While voices are being raised claiming that Durga Tiwari, Rupandehi district chairman of UML-aligned Youth Nepal Federation (YFN), was murdered for political reasons, police involved in the investigation have played down the claims.

Two motorcycle-borne assailants opened fire at the 40-year old Tiwari in Khairani, Devdaha-6 of the district on Monday afternoon while he was heading for Butwal Municipality with his friend Khushi Neupane. The assailants had come on a Bajaj Pulsar motorcycle and fled the scene immediately after the shooting.  Tiwari, who received a bullet in the torso, was rushed to Devdaha Medical College where doctors pronounced him dead shortly after his arrival.

A four-member panel was formed under the leadership of Nepal Police AIG Bigya Raj Sharma on Tuesday to investigate the murder, according to Ramji Dahal, press advisor to Deputy Prime Minister and Home Minister Bimalendra Nidhi.

Along with Sharma, National Investigation Department DIG Yadav Prasad Regmi, Nepal Police SP Manoj Neupane and joint-secretary at Home Ministry Shiva Ram Joshi are the members of the committee. The probe team has been given 15 days to come up with a report.

YFN had called a 'shutdown' of Lumbini zone on Tuesday in protest of the murder. Especially Butwal of Rupandehi remained tense as the protests intensified. Marketplaces remained lifeless. Daily life in Butwal was affected as vehicles remained off the road.

After the incident, Manoj Budha Magar of Devdaha-2, who is at large since a year, has reportedly claimed responsibility for the killing through a phone call to the local media. Police had arrested eight suspects said to be affiliated to Magar's group.

Earlier, on February 18, Tiwari had faced an attempt on his life. A group, later identified to be affiliated with Magar, had opened fire at Tiwari but he had escaped unhurt at the time.

“We have begun our investigation into Manoj's possible involvement in the murder. Although our main focus is Manoj, we are considering the possibilities of other hands,” informed SP Dhanuk.

Tiwari's body has not been sent for post-mortem. District-level leaders of YFN are adamant on not allowing post-mortem and the final rites until those involved in the incident are booked.

Tiwari was actively participating in the ongoing protests against the government's proposal to hive off five hill districts of Province 5. He was working as the acting district chairman of the youth wing after its district head Sarita Shrisha was appointed as central committee member of the organization.

Tiwari was leading those protests in Khairani areas of the district.

KATHMANDU, Feb 26: Nepal Police reiterated that Manoj Budha Magar aka Manoj Pun was the mastermind behind the murder of... Read More...