Police investigating 'in all directions' in Dortmund blasts 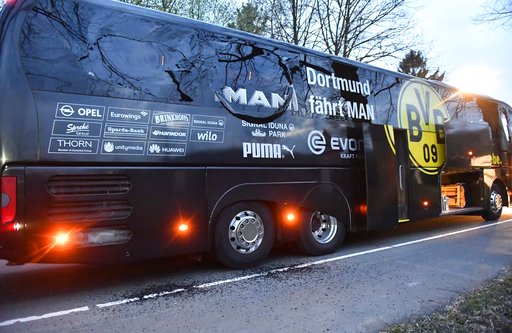 DORTMUND, April 12: German police said Wednesday they are investigating "in all directions" after three explosions went off near Borussia Dortmund's team bus ahead of a Champions League quarterfinal match, injuring one of the soccer team's players.

The first-leg match against Monaco was called off shortly before kickoff Tuesday evening following the blasts near the team hotel in suburban Dortmund, which authorities assume were a targeted attack. Players and police were preparing to go ahead with the rescheduled match on Wednesday evening, with heavy security in place.

Investigators were checking the authenticity of a letter claiming responsibility that they found near the scene, and were refusing to give any details of its contents, citing the ongoing probe. Another suspicious object found at the scene turned out to be trash.

Police spokeswoman Nina Vogt told ZDF television that "of course our investigations have to go in all directions to begin with." She said the direction of the probe remains "open."

Spanish defender Marc Bartra suffered injuries in the wrist and arm and underwent an operation Tuesday night. Police said an officer who was accompanying the bus on a motorbike was suffering from blast trauma and shock.

Borussia Dortmund president Reinhard Rauball said he was confident that the team would rise to the occasion for Wednesday's match despite the experience.

"How is the team doing? You can imagine yourself whether they slept well or badly," he said. The players were to gather Wednesday morning to digest Tuesday's events and prepare to face Monaco.

"This is certainly a difficult situation for the team which, I think, has not experienced such a situation before," he said. "However, we expect and I am confident that the team will do its best and deliver a spectacle in the Champions League this evening."

Thai police say wave of blasts not linked to terrorism