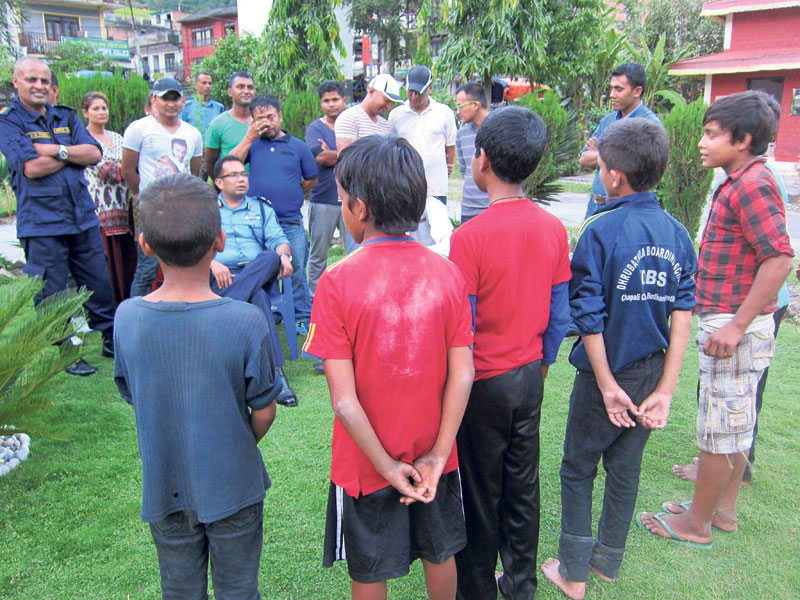 The rescued children at District Police Office (DPO), Baitadi. Many Nepalese children who cross border to work in Indian cities end up being exploited by unscrupulous employers or suffer other kinds of hardships. (Republica)

BAITADI, Sept 29: Police in Baitadi this week have intercepted 21 children who were heading for India for employment without informing their family members.

The children told the police that they fled their homes to work in India during the Dashain holidays, said Bal Narsingh Rana, chief of District Police Office (DPO), Baitadi. Of total rescued children, 16 are from Bajhang while five are from Baitadi. All children are aged between 12 and 18 years.

Police have increased surveillance along the border after it was found that many children visiting India for employment did not return. The rescued children have been handed over to their relatives.

“We were going to India to earn enough money to buy clothes and stationery,” said Janak Dhami, a ninth grader from Baj VDC-9, Bajhang. “We are very poor. So I wanted to make money during the Dashain holidays,” he added.

Generally, children form a group and flee homes to work in India as laborers. Many children discontinue their studies when they start working in India, according to Lal Singh Ter, District Education Officer of Baitadi.

“Poverty is the main reason behind the growing trend among children and youths to head for India,” he claimed, adding that children seldom return home or resume studies once they start earning. Nepali children have been working in various hotels, lodges and eateries in Indian towns such as Jhulaghat, Pithauragadh, Dharchula, Chamwawat and Luhaghat, according to Khima Nanda Bhatta, president of Baitadi Chamber of Commerce.

Since February, police at Jhulaghat border point have intercepted as many as 27 children and handed them over to their families while the whereabouts of 18 children remains unknown, according to the Baitadi District Police Office.

MUGU, May 9: In the absence of security personnel, the border police post in Karmarong Rural Municipality-2 of Mugu, which... Read More...

Nepal-India border to be sealed for 48 hours for poll

NEPALGUNJ, June 22: The border point in Banke district on the Nepal-India border is to be closed for 48 hours... Read More...