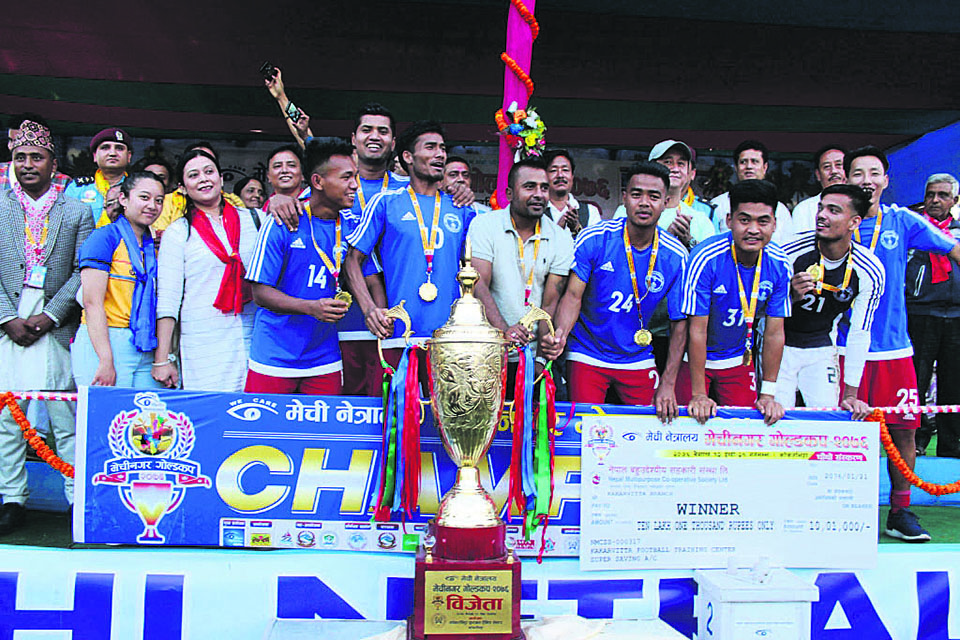 Members of Nepal Police Club pose for a group photo after winning the Mechinagar Gold Cup in Damak on Saturday. Yuvrab Bibas/ Republica

With the title win, Army has taken home a cash prize of Rs 1 million, while Army was rewarded with Rs 501,000. Police took revenge of the football tournament under the Eighth National Games where it had lost to Army in the final. Army had also defeated Police in the semifinals of the third edition of this tournament.

The game went into tie-breaker after both the teams failed to score a goal in the regulated 90 minutes. The tie-breaker finished with the teams scoring three goals each, and the match moved to the Sudden Death.

In the Sudden Death, Army’s Bikash Tamang’s shot went over the bar. Pariyar, for Police, hit the deciding kick and it surprisingly went in.

Police’s keeper Khadka was adjudged man of the match and rewarded with Rs 11,000.
Kakarbhitta Football Training Center’s Angel Gurung, Police’s Shatrudhan Chaudhary, Aashish Gurung, Army’s Sesehang Angdembe, Nawayug Shrestha and Police’s Ananta Thapa were named the rising player, the best goalkeeper, the best defender, the best midfielder, the best forward and the best coach of the tournament respectively. They all got a cash prize of Rs 21,000 each.

Also, Police’s Rabi Paswan, who was named the best player of the tournament, bagged Rs 101,000.

Club and Three Star Club participated in the tournament that started from April 25.

CHITWAN, May 12: Chitwan XI has advanced into the semifinals of the ongoing CMS Bharatpur Gold Cup Football Tournament with... Read More...

More than 50 people missing in Melamchi flood
19 hours ago

IN PICS: Flood wreaks havoc in Melamchi
11 hours ago

More than 50 people missing in Melamchi flood
19 hours ago