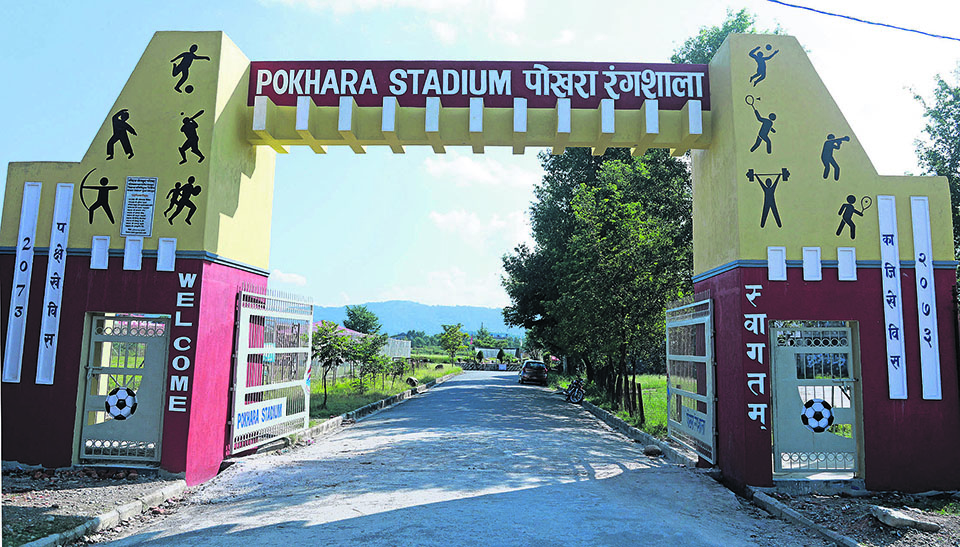 The gate of the under-construction Pokhara Stadium is pictured in this photo.

The organizers have expedited the construction of infrastructures necessary to hold women’s cricket as SAG is scheduled for December.

“Originally, we had decided to organize six games in Pokhara. But, addition of cricket is highly likely. Therefore, we need to speed up the construction of infrastructures,” said Rajesh Gurung, NSC board member.

Former national cricket team coach Jagat Tamata, after inspecting the stadium, advised that the preparation of ground should be done step-wise.

“All the works cannot be completed before SAG. Thus, ground leveling and turf repair should be done now. The eight feet tall inner fencing should be completed by the end of November,” he said.
“After that, temporary changing room and toilet should be built.”

Kaski District Cricket Association Chair Sanjay Kanta Sigdel said that the Pokhara Cricket Ground can be developed into an international venue in future.

“The allocated budget can be used to build required infrastructures to upgrade the stadium to international standard. But, since we have barely four months left, only the works of turf and fencing could be completed before the start of the Games,” said Sigdel.

If it goes as planned, Pokhara will host football, handball, weightlifting, archery, paragliding, triathlon and cricket.

The SAG 2019, which was originally slated to be held from March 9-18, is being held from December 1 to 18 after the new date was confirmed at the South Asian Olympic Council Executive Board meeting in Bangkok on March 1.

Adhikari's body at his hometown Pokhara

KATHMANDU, Jan 23: The 13th edition of Safal International Marathon is set to start in Pokhara on February 19. The city... Read More...