Podcast training for youths kicks off in Kathmandu 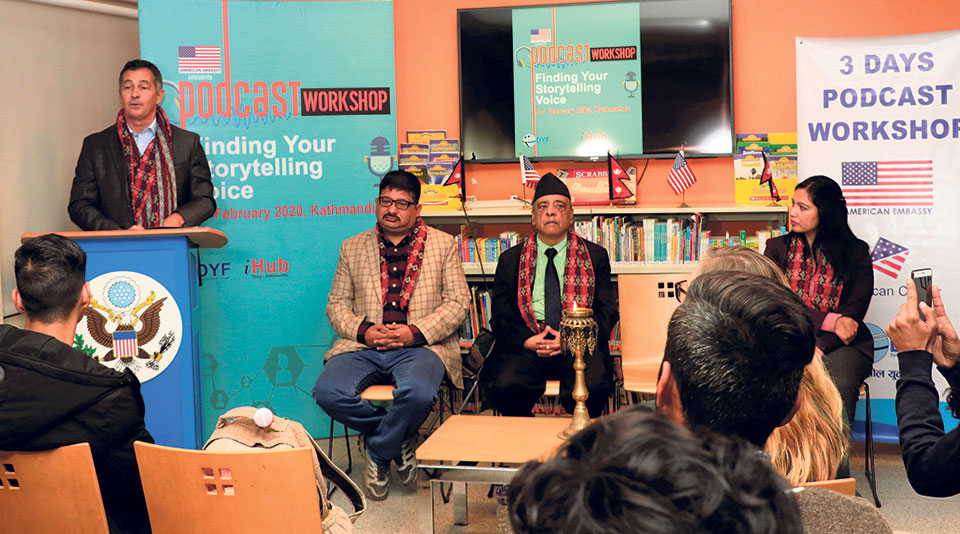 KATHMANDU, Feb 6: The US Embassy in Kathmandu in association with American Spaces and Dynamic Youth Forum has launched a three-day workshop on podcasts and the art of storytelling through videos and podcasts, Wednesday.

The event being organized at iHub at the Federation of Chamber of Commerce and Industries (FNCCI) building in Teku, Kathmandu, is the third such workshop organized in different parts of the country recently.

The participants will be focusing on youth issues and voices, along with highlighting local good governance, inclusion of all sectors and people, entrepreneurship among the youth specially the women, and many other relevant social topics.

Addressing the opening ceremony, US Ambassador Berry said that it is high time everyone thought of new ways of engaging with new audiences as the world gets more advances and people go more digital. “When our American Spaces team and trainers came up with a plan for the podcast workshops, I was excited for two reasons.  First, it promotes youth civic participation and we want the younger population to get involved and understand social and political issues, good governance, human trafficking, and more,” he said.

Ambassador Berry said that young people can use this platform well – not only to talk freely about issues that matter– but to also raise awareness. “Secondly, you can use podcasts effectively to talk about those issues which are generally overlooked or neglected by other media platforms,” he further said.

Shots fired at gate of US Embassy in Turkey, but no one hurt