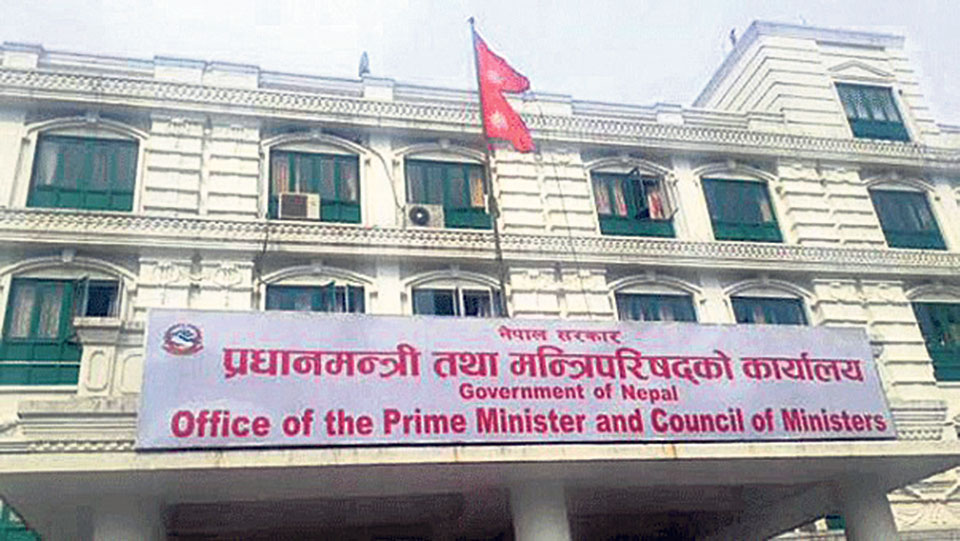 KATHMANDU, Jan 20: A secretary of the Prime Minister's Office (PMO) will head the national coordination committee on anti-money laundering activities and preventing terrorism financing if a provision in Some Nepal Acts Amendment Bill 2018 is approved as it is by the parliament.

The Finance Secretary, who currently heads the committee, will be its member if the bill is endorsed as it is.

The committee is an important body for policy formulation on anti-money laundering and terrorism financing. It will also work toward coordinating different entities for risk assessment on the matters that play crucial role in implementing government decisions.

Officials at the Ministry of Finance (MoF) including the incumbent Finance Secretary Rajan Khanal were taken by surprise by the bill registered in the parliament as they were not consulted on the matter. This is also against a general practice of taking opinion of concerned entities while formulating laws.

The MoF was also separately preparing a draft of amendment of Money Laundering Prevention Act 2008 to insert several provisions including the Finance Minister to chair the coordination committee in order to make the entity more powerful so that it could effectively pursue matters related to combating money laundering. But the MoF has now handed over the draft to the PMO without any comment.

Sources in the government who have direct knowledge of the matter said that the PMO secretary-led committee will be less effective than the Finance Secretary or the Finance Minister because any secretary in the PMO will be less stable. Besides, the post of secretary at the PMO is considered a neglected post. There are four to five secretaries in the PMO.

"There was a kind of accepted notion that the having the Finance Minister as the head of the committee shall make its functions more effective,” said a privy source at the MoF.

The source claimed that even the Finance Secretary is finding it hard to issue directives to different regulators including Nepal Rastra Bank's Governor, who ranks higher than the secretary.

Confirming the claim, Finance Secretary Rajan Khanal admitted that he has faced uneasy situations to direct higher ranking officials including the NRB governor and chairmen of other regulatory bodies. However, he declined to comment on why another government secretary was being proposed to lead the committee through amendment in the law.

"OPM's secretary makes the committee weaker than the Finance Secretary," argued another source at the MoF.

An official at the PMO argued that the bill was prepared as the Department of Anti Money Laundering (DMLI) has now been brought under the PM's office. The official was not allowed to talk to media.

Prime Minister KP Oli brought DMLI under PMO from Ministry of Finance to exercise more authority on issues related to money laundering, but many say that no results have been achieved so far due to the change.

Agencies that investigate financial frauds have found that the majority of cases investigated are of financial crimes that demand serious coordination among the entities that are mostly under the Ministry of Finance.

Lawmaker Nawaraj Silwal, who is also a retired DIG of Nepal Police, has registered an amendment motion in the parliament proposing that the political leadership should head the high level committee instead of civil servants.

On Republica's query, Silwal said that he will first give justification on his motion at the parliament next week before talking to the media.

Silwal is a former head of the Central Investigation Bureau, a special unit of Nepal Police that oversees money laundering and financial crime investigations.

The minister's move has come in the wake of the Nepal Leaks disclosure about 55 Nepalis stashing ill-gotten money in different offshore companies and foreign banks. Most of them have also brought the money into Nepal as foreign direct investment.

Who are PR candidates from nationally recognized seven parties?
1 minute ago