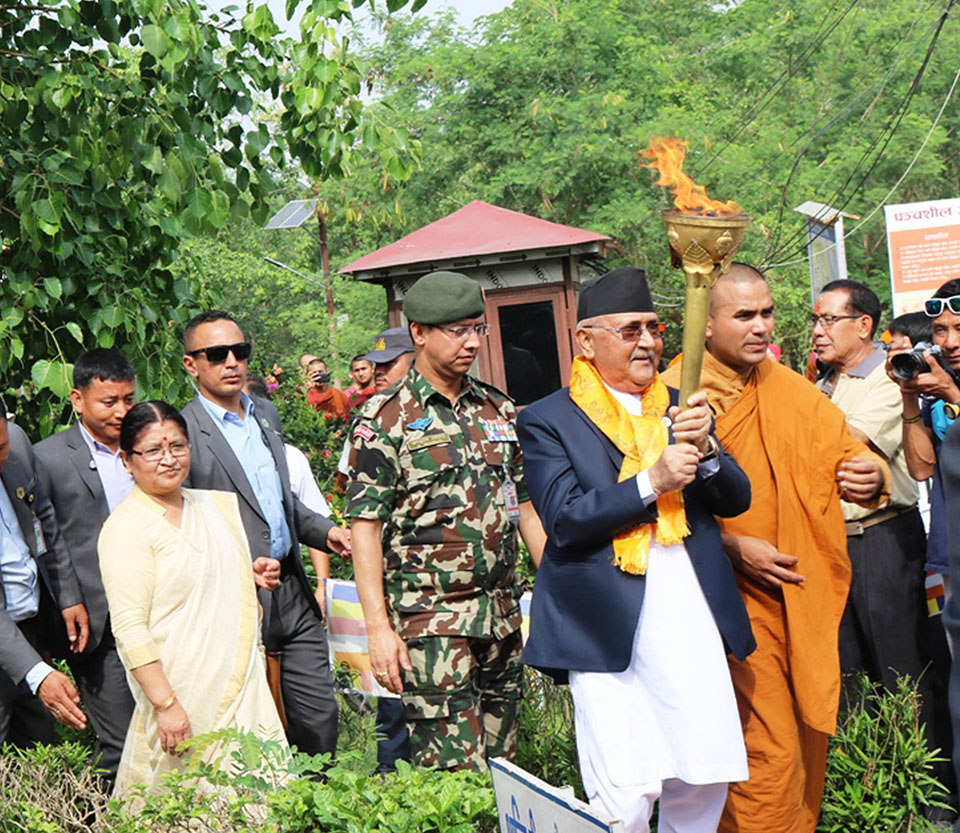 LUMBINI May 19: Prime Minister KP Sharma Oli has vowed to revive an international committee formed  under the United Nations  some 49 years ago for the development  of  Lumbini,  birthplace of Lord Gautam Buddha, and garner international support for that purpose.

The prime minister’s  assurances come at a time when the government has been facing criticism for not developing the Buddhist shrines as envisioned in the masterplan for Lumbini development.

It has been over five decades since then secretary general of the United Nations, U Thant, visited Lumbini and set in motion the UN’s initiative for the development of the Buddha’s birthplace.

U Thant’s leading role in involving the UN, along with Japanese architect Kenzo Tange’s masterplan, are considered important milestones in the development of Lumbini as a pilgrimage and tourism destination. However, Lumbini is still far from becoming what U Thant had envisaged for the Buddha’s birthplace —a symbol and a catalyst for global peace, environment protection and development.

Amid such criticism, Oli said his government would revive the international committee under the UN and garner international support for Lumbini development.

In 1970, a 15-member international committee led by U Thant was formed for the wider  development of the Lumbini area.  The committee, however, has been in hibernation for years. Prime Minister Oli spoke of reviving the committee and seeking international support for  developing the Buddhist shrines.

Addressing a special function Saturday organized on the occasion of the 2563rd Buddha Jayanti, PM Oli said his government will also give due priority to developing the Buddhist shrines scattered over Kapilvastu and Nawalparasi districts.

“We will bring special plans to develop Kapilvastu and Nawalparasi. Apart from this, our prime focus will be to preserve the infrastructures in Lumbidi and promote them across the world.”

Inaugurating a special function organized in Lumbini on the occasion of Buddha Jayati , the head of  state urged stakeholders  to develop the areas envisioned in the masterplan.

The president lauded the support and sympathy of the locals and urged them and the government to make  maximum use of local resources and skills when implementing the masterplan.

She opined that a Buddhist circuit can be developed connecting Lumbini with the sacred sites of Tilaurakot, Ramgram, Devdaha and others and connecting Buddhist countries with Lumbini.

“It is equally important to give high priority to developing cultural gardens and promoting bio-diversity and greenery,” said the president, stressing the need  to complete ongoing work at Gautam Buddha International Airport. “This area can be  promoted as a world class university for Buddhist studies.”

President Bhandari praised the United Nations for its initiative to recognize Vesak as   International Peace Day.

If you are traveling when a Nepal bandh has been called, you will inevitable run into a lot of trouble.... Read More...