PM urges police to be proactive to ensure peace and security 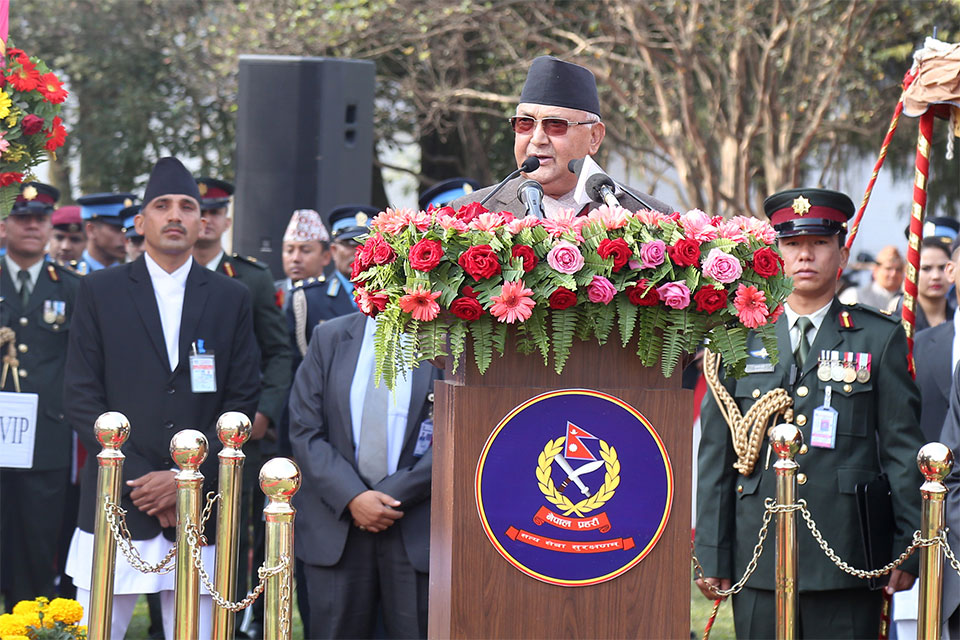 KATHMANDU, Oct 12: Stating that the failure to solve even a single case can dent the image of police despite 90 percent success rate in booking criminals, Prime Minister KP Oli has asked Nepal Police officials to proactively work to maintain peace and security and ensure the safety of the general public.

Addressing a function organized to mark the 63rd Police Day held at Nepal Police Headquarters in Naxal on Thursday, the prime minister cautioned police officials that since failure counts more than success in the eyes of the public, police should leave no stones unturned to ensure effective security. “One mistake can defame the entire organization. Nepal Police should put in more efforts to ensure the security of the public,” he said.

Expressing condolence to the families of the police personnel who made supreme sacrifice in the course of duty, Prime Minister Oli highlighted the need for a new Federal Police Law, which is vital for the transition phase the police organization is currently in. “Nepal Police has to look after both the federal as well as the provinces in this transition period,” he said, “It is high time that a federal police law was formulated.”

At the program, Prime Minister Oli and Inspector General of Police Sarbendra Khanal handed out certificates to the family members of the police personnel who died on duty last year. At the function, former Additional Inspector General (AIG) Amar Singh Shah was honored with the Lifetime Achievement Award of Nepal Police.

Negligence by a few officers is not the negligence of the entire organization: IGP Khanal

Citing increased workload and lack of adequate manpower as two major problems that the police organization faces currently, IGP Khanal said that Nepal Police in itself is an organization of experts and that it is committed to effectively controlling crime in the country.

Kidnapping cases up by 29%

KATHMANDU, Dec 5: While Nepal Police claims that kidnapping cases have declined over the last few years due to increased... Read More...