PM urges everyone to make ‘Literate Nepal Campaign’ a success 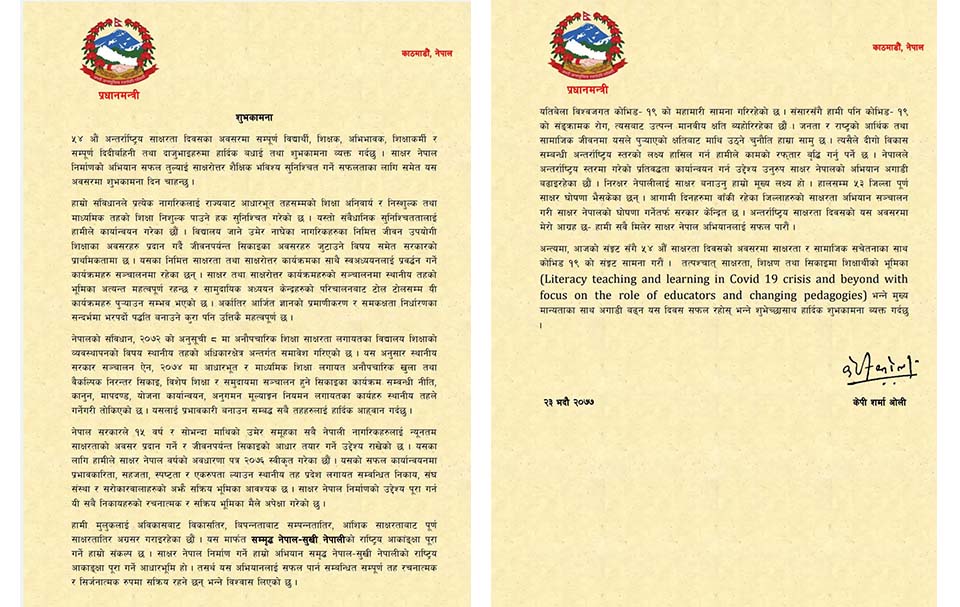 KATHMANDU, Sept 8: Prime Minister KP Sharma Oli has called on everyone to ensure a literate future by making the ‘Literate Nepal Campaign’ a success.

PM Oli also stated that ensuring lifelong opportunity for learning about life skills education to those who have already crossed the school going age is also a priority for the government. For this to materialize, literacy and post-literacy as well as self-study programmes have been introduced, the PM added in his message.

The message reads, “The role of local units is very significant in running a literacy programme. It is possible to take such a programme to every settlement through the mobilization of community study centres.”

“The government has set a target to provide opportunity of basic literacy to all Nepalis up to 15 years as well as above 15 years to prepare the basis of lifelong learning and we have approved the concept paper-2076 of  Literate Nepal for the same”, the PM mentioned in his message.

PM Oli stressed the need for a further active role of the bodies concerned, organisations and stakeholders to bring effectiveness, clarity and uniformity in its successful implementation.

“We have been heading toward making the country a developing country from a least developed one, and toward prosperity from poverty and toward fully literate from semi-literate. The national goal of ‘Prosperous Nepal, Happy Nepali’ will be fulfilled through this,” PM Oli stated.

So far, 53 of the 77 districts in the country have been declared fully literate. The government is focused on declaring literate Nepal by running the literacy campaign in other districts too.