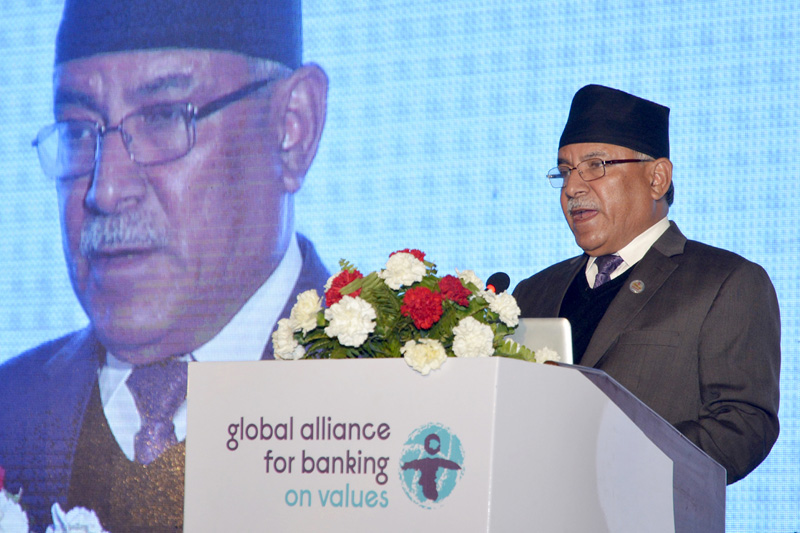 KATHMANDU, March 7: Prime Minister Pushpa Kamal Dahal has said the banks and financial institutions should play a pivotal role in raising the living standard of the people through mobilization of the financial resources.

Addressing to the annual conference of the Global Alliance for Banking on Values (GABV) here today, PM said, "The theme of this conference 'Shifting the Financial Paradigm – Courage to Act Together' itself emphasizes less on profit but more on people and community, good governance, accountability, transparency, corporate social responsibility, accessibility of grass-root people to banking services, and sustainable banking with ethics." The conference is jointly organized by the GABV and NMB Bank Ltd.

Banks and financial institutions or BFIs are the lifeline for capital formation, lifeline of lifeline of economic development and eventually lifeline of progress and prosperity, the Prime Minister said adding that BFIs played a crucial role in leveraging financial resources and help uplifting the living standard of people.

Stating that access to value based banking system must be treated with priority, he said, "We all acknowledge that value-based banking through fair money and capital markets helps flourish businesses, industries and entrepreneurships in an economy."

He stated that since the 1990s, Nepal adopted liberalized economic policies that resulted in expansion of banks and financial institutions in the country. While undergoing liberalization drive, financial sector reforms were the major reforms in the first phase of economic reforms. "Currently, we are in the second phase of reforms aiming at reforming banking laws, making financial system inclusive, accessible and based on values. Recently we enacted Banks and Financial Institutions Act (BAFIA)."

Noting that banking and financial institutions have enormous responsibility for generating desirable economic growth, particularly for promoting industrial growth, the Prime Minister said in this regard, the role of value-based banking remains even more critical.

Calling on the banking leaders and other stakeholders in the country to focus on investing in the productive sector of economy while adhering to those banking principles, he said, "It is well-known that investment in productive sector would help generate employment which would then contribute to reduce poverty in the long run and stop the current mass outmigration of youths for employment."

Transforming Nepal from the current underdeveloped status to developing country status by 2022 and middle income country status by 2030 would undoubtedly require huge investment in infrastructure. Nepal is looking for significant investments in power, transport and tourism sectors. We need more of international standard infrastructures. But we lack much-needed resources to this end.

Not only in banking sector, Government of Nepal urges all other sectors as well to adopt value system at the core of their business. We need to drive all players of the economy including banks to deploy their resources for the good of their countries. Furthermore, there are some other areas where Banks can promote sustainable businesses. Agriculture, tourism, manufacturing from small and medium industries, big industries, energy, mines and minerals, transportation and airlines services, information and communications are prospective sectors in Nepali economy waiting for valued-based investment.

The Government through central bank is gradually implementing various tools to encourage investment in productive sectors. The Government is fully committed to develop the real sector and therefore would make utmost efforts towards building enabling environment for its development. In the two recent mega events that were successfully convened- Nepal Infrastructure Summit and Nepal Investment Summit, the Government, the opposition and other political parties as well as private sectors show their full commitment to make conducive environment for investment in Nepal. I believe, value-based banking has more to do with this.

The Prime Minister hoped that this conference would deliberate in a way to make the banking system more responsible towards the needs of people and community as part of their corporate social responsibility.

CEOs and senior executives from more than 40 Banks and financial institutions represented from across the world are participating in the conference. RSS

KATHMANDU, Mar 1: Prime Minister KP Sharma Oli has said the government was working on a plan to hit a... Read More...