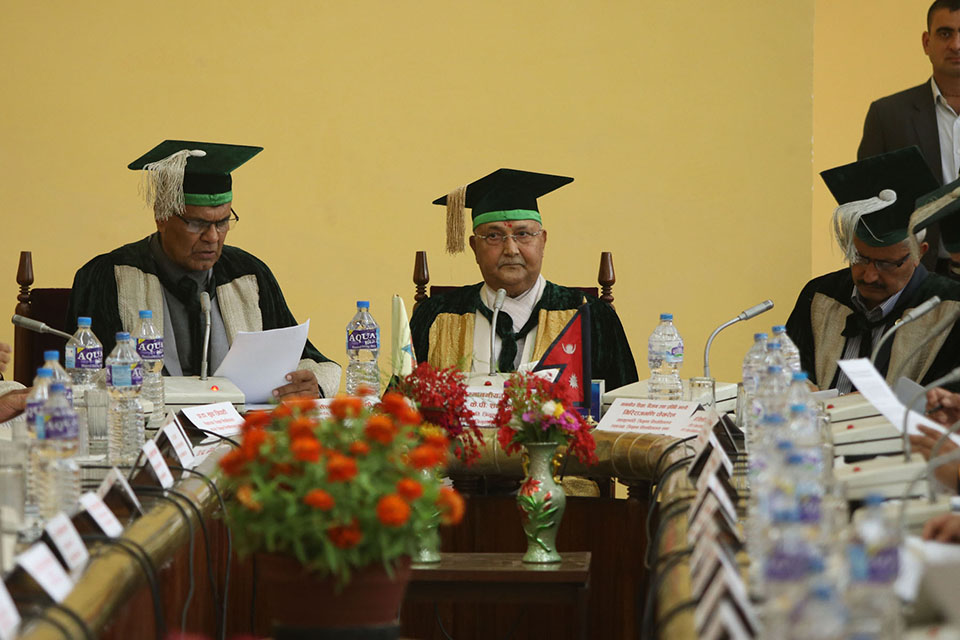 Addressing the 60th annual day meeting of the TU Assembly here today, Prime Minister Oli stressed the need of according special priority to technical, scientific, employment-oriented and quality education. He said, "Educational institutions should be developed as temples (of knowledge and learning). No one should commit unlawful acts and be influenced by unnecessary things.

The government will not listen to such lobbying." Also the Chancellor of the TU, PM Oli said that the TU should focus itself to produce human resources as per the demand of the market, expressing happiness at TU featuring among the top 1,000 universities in the world and 300 in Asia.

Saying the TU leadership should review their weaknesses and mistakes, Minister for Education, Science, and Technology, Girirajmani Pokharel urged TU to move ahead in a new way after categorization of federal and provincial universities. Also the Pro-Chancellor of TU, Minister Pokharel said, "TU should involve producing competitive, capable and energetic human resources.

It cannot run from the same way it has been working." Likewise, TU Vice-Chancellor Prof Dr Tirtha Raj Khaniya said that the TU has given priority to make timely curriculum and making a revision on it in order to make its products competitive and research and result-oriented in the national and internal level.

Similarly, TU Rector Prof Dr Sudha Tripathi pointed out the need of a person having willpower and courage to end different anomalies taking place on TU. On the occasion, PM Oli inaugurated the newly constructed office of the Vice-Chancellor. The 57th 'grace list' presented by Registrar Dilliram Upreti was passed in the meeting.