PM Oli and his spouse Radhika Shakya at Bangkok Airport during transit while flying to Singapore on Friday. Photo courtesy: Bishnu Rimal 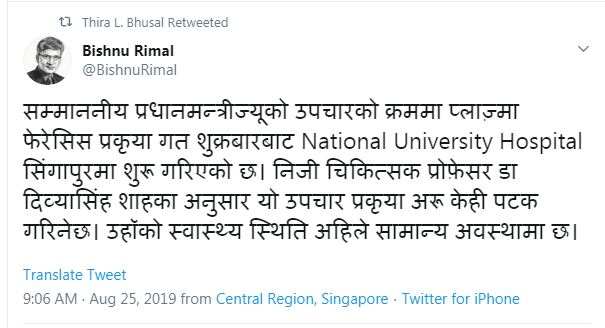 On Friday, Oli had left for Singapore 10 days after returning from there for his medical check-up.  Oli's advisors say that there is nothing to worry regarding the PM’s health.

During his treatment in Singapore, the doctors will primarily be focused on reducing the number of antibodies in the PM’s blood. According to them, the number normally goes up after kidney transplant. The doctors will take several measures to increase the functioning of the kidney and decrease creatinine level.

Antibody related to kidneys was found more than required in Oli's body during his health check-up in Singapore last time.

The prime minister is accompanied by his spouse Radhika Shakya, personal physician Singh and among others. Earlier in 2007, Oli underwent kidney transplant surgery. Since then he has been on kidney enhancement drug therapy.