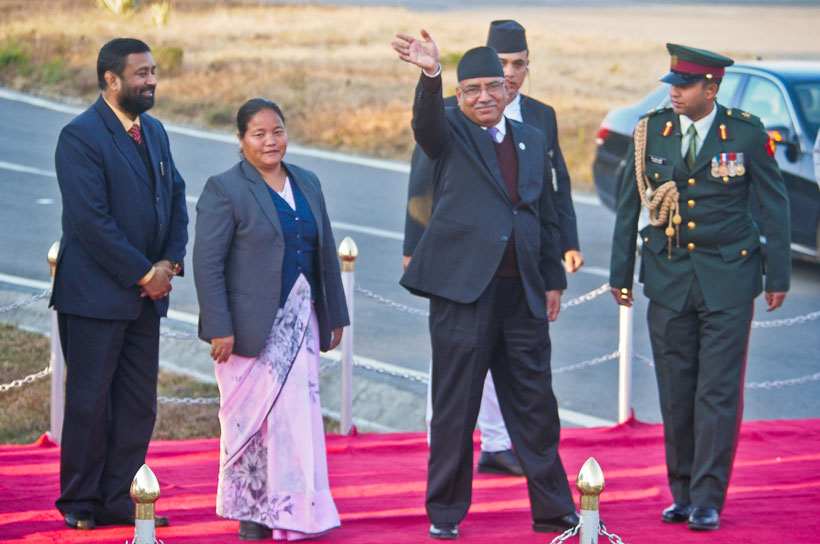 The PM is paying the visit at the invitation of Crown Prince of Abu Dhabi, Sheikh Mohamed Bin Zayed Al Nahyan, and Deputy Supreme Commander of the UAE Armed Force.

PM Dahal is to deliver keynote address at the opening ceremony of the World Future Energy Summit -2017 and to attend the Honouring Ceremony of Zayed Future Energy Prize as well as to hold bilateral talks.

Speaker Onsari Gharti, Deputy Prime Minister and Home Minister Bimalendra Nidhi, Ministers, representatives of the constitutional bodies, the heads of the diplomatic missions based in Kathmandu and the chiefs of the security bodies saw off the PM at the VVIP lounge of Tribhuvan International Airport.

The PM's entourage consists of Foreign Secretary Shankerdas Bairagi, Chief of Protocol Deepak Adhikari, the Prime Minister's advisor and security team, representative of the Office of the Prime Minister and Council of Minister. The delegation also includes Energy Minister Janardan Sharma and other high officials at the Ministry of Energy including the Joint Secretary.

PM Dahal is scheduled to address the Summit on Monday. In his address the Prime Minister will shed lights on the energy development potentials in Nepal, investment opportunity in the energy sector and Nepal's efforts in developing clean and renewal energy besides others. The Summit also provides an opportunity for Nepal in seeking financial assistance in its endeavour in developing clean and renewal energy.

Moreover, he is scheduled to hold bilateral talk with Sheikh Mohammed bin Rashid Al Maktoum, Vice President and Prime Minister of the UAE and Ruler of Dubai on 15 January in Dubai before the inaugural of the Energy Summit.

The PM will discuss various matters including further strengthening and widening of bilateral relations, cooperation in the regional and international forums, economic and development cooperation, investment opportunities in Nepal, tourism promotion and protection of the interest of Nepali workers in the UAE and providing them easy consular services and legal assistance during the official talks.

He is also scheduled to have official discussion with other high-ranking leaders of the UAE. The PM will return home on January 17. RSS