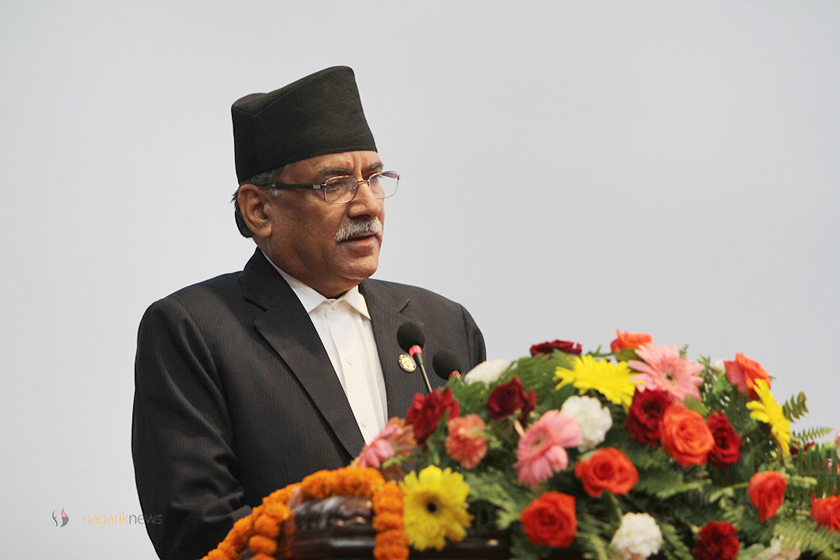 ROLPA, Feb 17: Prime Minister Pushpa Kamal Dahal 'Prachanda' has said the country can reach the stage of socialism as envisioned by the constitution only through economic prosperity and development.

The Prime Minister said this while inaugurating the Rolpa trade and business fair held in Liwang, the district headquarters of Rolpa, today.

He said Rolpa which played a significant role in the political change has high potentials for being developed as a war tourism destination.

Noting that epochal political change had become possible due to the dedication and sacrifices made in the bpast, the PM said proportional representation, federalism, secularism and republic were the assets of those sacrifices.

"I used to come to Rolpa even during the hard and trying days of the war period to energise myself," the Prime Minister reminisced, adding, "now also I have come to Rolpa to ask for the support and cooperation of the Rolpalis for the constitution implementation."

Stating that the credit for his becoming the first Prime Minister of Republic of Nepal goes to Rolpa, the PM pledged to continuously work for the development and transformation of this district.

He shared that the republic was achieved through victory in the political war and that Rolpa has now got representation in key state organs due to its important contribution.

The Prime Minister, who is also the chairman of the CPN (Maoist Centre), stressed that the base for socialism could be built through development and economic progress rather than from revolution and movement.

He also stated that on the one hand there was one side in the country which wanted to prevent political power of the Singha Durbar (centre) reaching the village level and on the other a force that wanted to return back to the past.

Also accompanying the Prime Minister were Deputy Prime Minister and Minister for Finance, Krishna Bhaadur Mahara and former Finance Minister Barshaman Pun.
The trade and business fair organised by Rolpa Chamber of Commerce and Industry will run until February 23. RSS