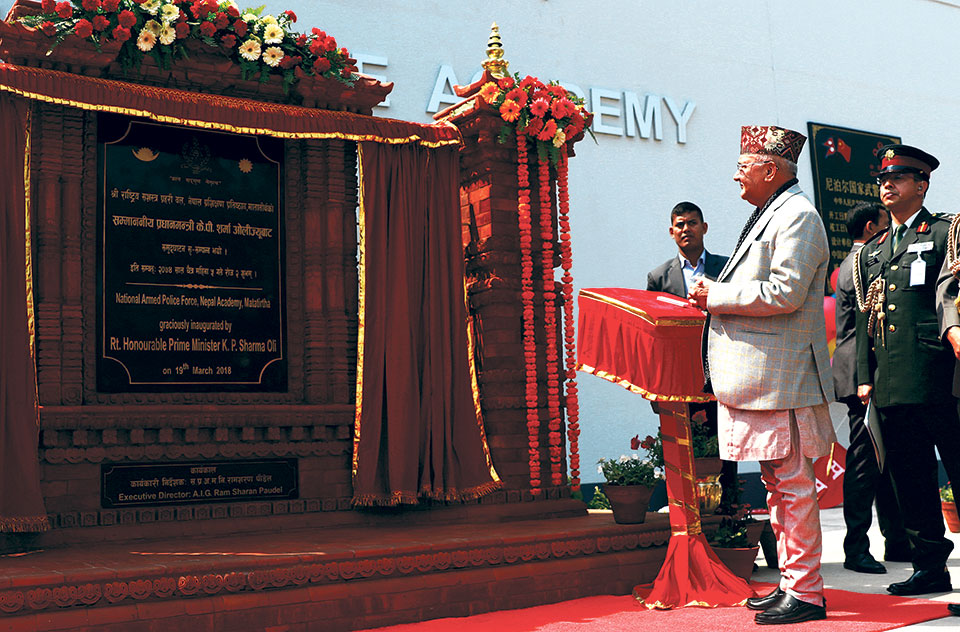 KATHMANDU, March 20: Prime Minister KP Oli inaugurated the national training academy of Armed Police Force (APF) at Matatirtha in the capital on Monday. The National Armed Police Force Academy, which spreads across an area of 318 ropani, was constructed with support from the Chinese government.

Inaugurating the training center constructed at the cost of Rs 3.6 billion, Prime Minister Oli thanked the Chinese side for constructing an important infrastructure for the security agency.

"The construction of the important infrastructure with support from China suggests how Nepal-China friendships will move forward in the coming days," he added.

The construction of the training was started from mid-April, 2015 by China Railway 14th Bureau Group Co Ltd and was completed by May 15, 2017 as per the agreement reached between Nepali and Chinese sides in 2013. The Chinese side constructed 19 individual buildings, namely, teaching building, dormitory, canteen, the indoor training venue, and the outdoor training venue among other structures for the academy. The construction was completed six months before the deadline.

Subsequently, the academy was formally handed over to the APF on June 30, 2017 and is already in operation. However, it was formally inaugurated by Prime Minister Oli on Monday.

Home Minister Ram Bahadur Thapa, who had accompanied the prime minister, said that the security agency will make optimum utilization of the academy.

Similarly, Chinese ambassador to Nepal Yu Hong said that the construction process had suffered a brief obstruction during the earthquakes but the project overcame all the difficulties and was completed before the deadline.

"The National Armed Police Force Academy, like other Chinese aid projects, is the symbol of China-Nepal friendship, containing the sincere feelings of the Chinese people toward the Nepali people, and the true friendship between the peoples of the two countries tested by earthquakes," she said, adding, the cooperation under the framework of Belt and Road Initiative will bring new opportunities to the development of Nepal.