PM directs APF to get ready for three-tier elections 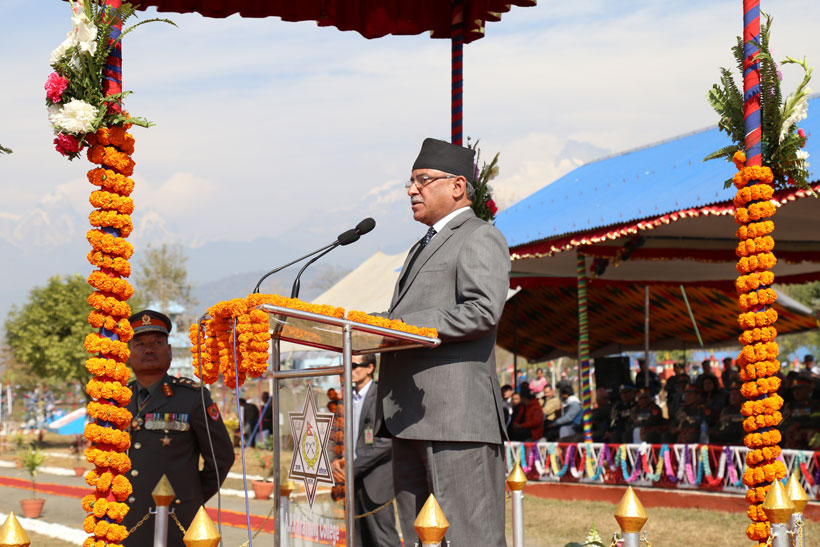 POKHARA, Jan 26: Prime Minister Pushpa Kamal Dahal has expressed his confidence that the Armed Police Force (APF) would be successful in maintaining peace and security in the country with the adoption of more effective strategic plan.

Addressing the convocation ceremony of the basic training of APF Inspectors (serial number 11) concluded at the APF Training College based in Lamapatan, Pokhara, the Prime Minister pledged to support to make the APF institute resourceful as per the demand of the time.

"The APF is capable to face present security challenges," he said, directing the security body to get ready for the elections of three tiers going to be held in near future in the country.

On the occasion, Deputy Prime Minister and Minister for Home Affairs Bimalendra Nidhi said the constitution had transformed the country into a federal democratic republic state and the APF role was pivotal to promote prosperity and good governance and to protect national integrity.

APF Inspector General Durja Kumar Rai said the APF had a significant role for greater welfare of the nation and in guaranteeing people's security, insisting on cooperation among all state security agencies to face increasing security challenges.

On the occasion, the best performers were honored. A total of 25 APF officers successfully completed the 54-week long training. RSS

KATHMANDU, Dec 10: Prime Minister Pushpa Kamal Dahal has said constitution amendment itself is the beginning of its implementation. ... Read More...

Who are PR candidates from nationally recognized seven parties?
23 minutes ago