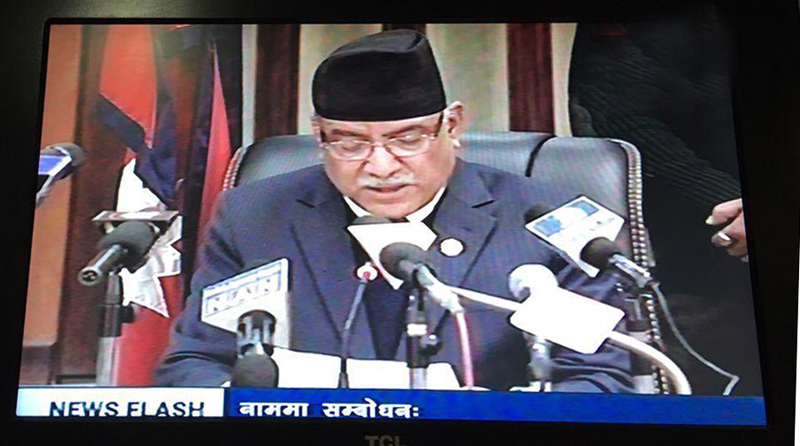 KATHMANDU, Feb 28: Prime Minister Pushpa Kamal Dahal has appealed to people from Tarai, hills and mountains to get ready for the upcoming local elections scheduled for May 14.

Addressing the nation, Prime Minster Dahal said that holding all three tiers of elections has become urgent also because the Supreme Court issued an order reminding the constitutional provision that made it mandatory to hold the three elections by January 21, 2018.

The prime minister also sought support from the international community in holding the elections.

Dahal further reiterated that the constitution amendment proposal and local elections would be taken forward simultaneously in order to ensure the federal democratic republic.

Saying that Adivasi Janajati, Madhesis, Dalit and people from backward region had a significant role in bringing political changes in the country, Dahal assured them that their rights would be ensured in the constitution.

In his address to the nation, Dahal said unless the local elections, which has remained stalled for the last two decades, are held on the stipulated date, the federal democratic republican system will be at jeopardy.

Holding local polls is also indispensable to ensure the rights of suppressed group of the society, said Dahal.

KATHMANDU, June 6: Prime Minister Pushpa Kamal Dahal has said that it would be wise to strike a deal on... Read More...

No agreement on local polls under existing structures: PM Dahal