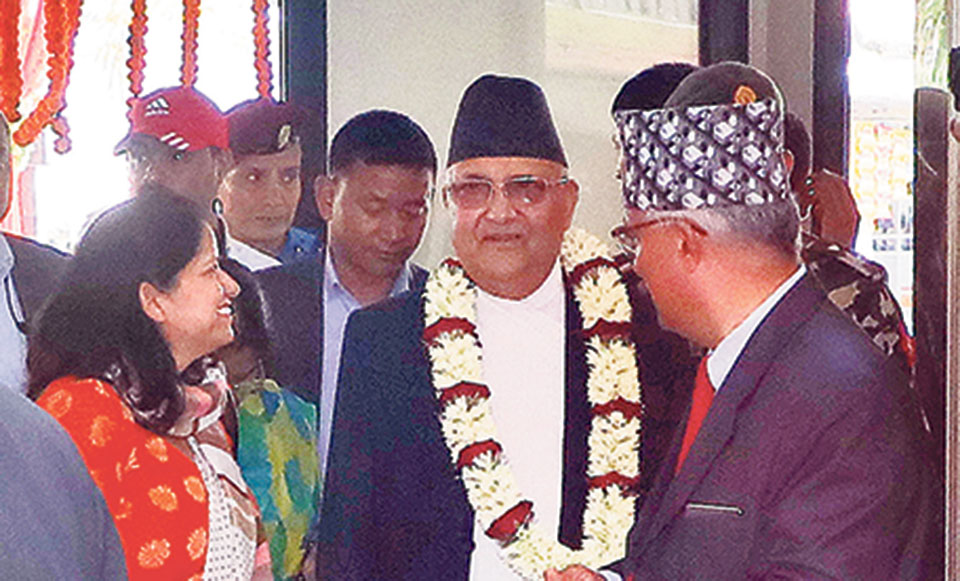 POKHARA, June 2: The inauguration function for a newly-built hotel in Pokhara attended by Prime Minister K P Sharma Oli on Saturday has set an example how top leadership can suffer a dent in stature if they bend to undue political influence or are ill-advised.

Oli came for the inauguration of the Swiss International Hotel Sarowar, which has flouted building standards set by Pokhara Metropolis, but did not inaugurate it.

The 10-storey hotel was built with an investment of Rs 2 billion but Pokhara Metropolis has barred the construction of buildings taller than 35 feet in the lakeside area. Locals had smelt some foul play after it was found that one of the investors, Bharat Raj Pahari, was also the coordinator of the city's housing standards committee.

PM Oli had reached Pokhara on Saturday with three programs in his itinerary: the hotel inauguration, a program of the Nepal Scouts, and the announcement of the Rabindra Adhikari Foundation. There was already a wave of criticism from the public in the past couple of days after the itinerary was released.

As per the schedule, Oli reached the hotel at 10 am to attend the first program of the day. The organizers quickly asked all attendees including Chief Minister of Gandaki Province Prithivi Subba Gurung and federal and provincial ministers to enter the meeting hall on the ground floor.

However, the function was delayed and the guests were told the prime minister was resting for a while. They were kept waiting for two hours. Meanwhile, Oli remained on the floor of the hotel where he even had his lunch. At the end of the two hours, he played a wildcard, walking away without inaugurating the hotel.

Even after not actually inaugurating the hotel shadowed by controversy, PM Oli has been criticized for going there in the first place. “The Prime Minister should not have come to the inauguration of a hotel flouting building standards,” on hotel operator said.

Another hotelier claimed that Oli should have at least addressed the function. “If he had done that, it would have somehow encouraged investors in the sector.”

Political Science professor at Prithvi Narayan Campus Kapilmani Dahal said PM Oli did not do his homework . “The prime minister would have known about the controversy surrounding the hotel if he had posed some queries,” he said, “It was a case of undue political influence at work.”