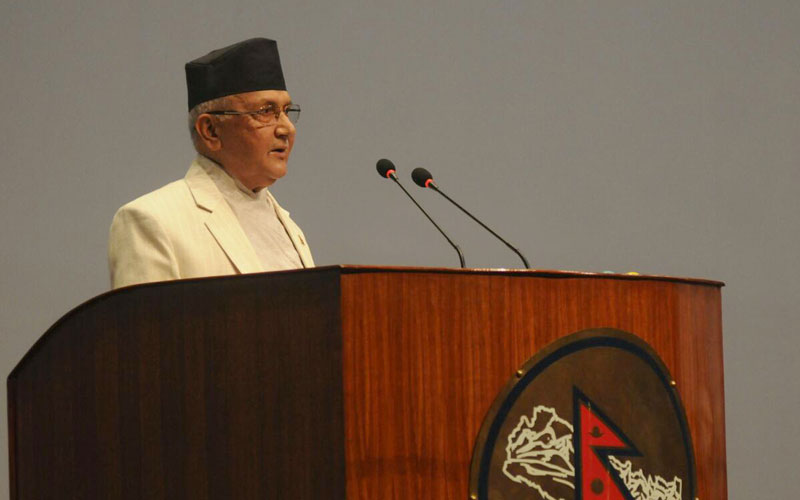 KATHMANDU, June 29: Prime Minister KP Sharma Oli on Wednesday apprised the House of the Kabul Attack that claimed the lives of 13 Nepali security guards in Afghanistan on June 20.

The Prime Minister was scheduled to inform the House about the incident a few days ago, but his address to the House was postponed due to continuous obstruction by the main opposition party, Nepali Congress (NC).

PM Oli said that the government was quick to respond to the Kabul tragedy.

“An aircraft, sent to Kabul on the second day of the incident, brought back 12 dead bodies and 24 others working in the war-ravaged country,” he said.

“The government has no objection in providing the relief amount in a lump sum,” he said, “The work plan on relief distribution is stopping the government from doing so.”

NC lawmakers stood from their seats after the Prime Minister said that relief amount will be provided in two installments only if the main opposition party and donor agencies agree.

PM Oli said that the government needs to take consent from donor agencies on amending the work plan.

The parliament resumed from today after the ruling and opposition parties agreed to provide Rs 200,000 to earthquake victims in two installments.

The Prime Minister said that the post-quake reconstruction was being undertaken with transparency, and refuted allegations of discrimination made on basis of political beliefs.

Addressing the Legislature-Parliament session here, PM Oli maintained that the National Reconstruction Authority (NRA) was not working on basis of political belief and that every work undertaken was transparent in nature.

"The Authority's decision has not meant profit for some parties and losses for some other parties, and it will not be in the coming days as well."

"The present priority is to construct settlements for the people living under open sky and secure them," PM Oli shared.

The PM spoke of modifying the working procedure to ramp up the reconstruction work, and insisted that everyone's concern should be on building a small house and providing relief to the victims.

The PM was of the opinion that the reconstruction work was now advancing with speed although the fuel shortage coming on heels of recent blockade had created hurdles in collecting construction materials.

The government has no problem in modifying the directive in consultation with the donor agencies so as to smoothen and facilitate the grant assistance, he added.

The PM further said that the working procedure would be amended to stop misuse of the amount provided for the construction of houses, to take action against those providing fake details and to make banking process easier and smoother.

Prime Minister Oli said that the government was committed to fulfill genuine demands of opposition party, saying it was necessary to move ahead by ending transition of the country soon.

On a separate note, the Prime Minister once again appealed to the agitating parties for talks. The Madhes-based parties boycotted today’s meeting of the parliament.

KATHMANDU, April 26: Prime Minister KP Oli has come down heavily on government officials for their failure to expedite the post-earthquake... Read More...

Nepal thrash Malaysia by 69 runs, will take on the Netherlands in final
19 hours ago