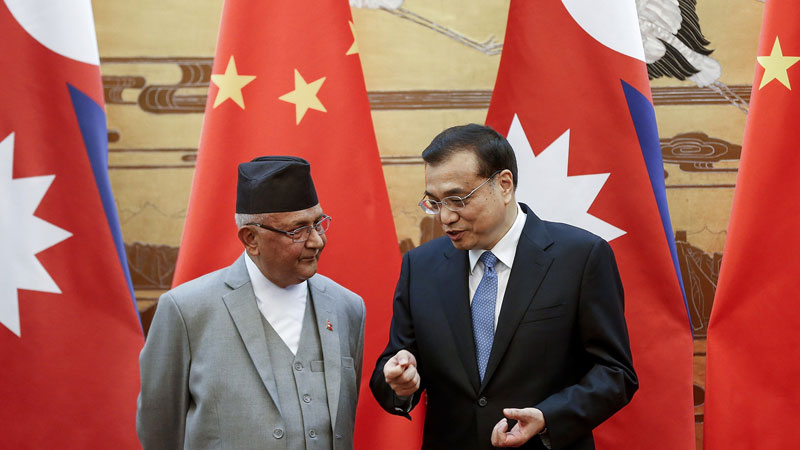 If Madhesh remains unstable, Nepal’s misgivings about India’s interference will make it more and more dependent on China, economically and militarily
Memories of India’s trade-blockade of Nepal some three decades ago, in early 1989, may have faded but it was a catastrophic event for Nepal.

Without warning and giving no time for a negotiated settlement, India closed its border with Nepal in April of that year. This created undue hardship for the people on both sides of the border, especially on the Nepal side where people depended heavily on imports from India. For them there was no possibility of immediately finding alternate sources of supply. The unavailability of critical items such as gasoline, salt, clothing, medicines and construction material affected all groups of people in all regions, in a way that was never seen before.

The background to this incident has never been officially explained, either by Nepal or India. But the unofficial version points the finger at Nepal’s overtures towards China—obtaining military supplies without prior knowledge, much less permission from India, which is required under the 1950 Treaty between India and Nepal. Reportedly, Nepal had purchased weapons from China for Nepal Army and these weapons were being trucked into the country via the Nepal-Tibet border when the Indians got the wind of it. This led to Indian government’s decision to close the Indo-Nepal border as a defense measure and also to teach Nepal a lesson for seeking military support from China, its arch rival.

The unverified story is that late King Birendra was on a tour of the Western region of the country when he saw some fighter planes cross-cross Nepal’s border with India. When he inquired about the identity of planes, his defense attaché told him that those were Indian Air Force fighter jets that flew over Nepal territory routinely, for training and intelligence gathering. The king was further told that Indian government had sought no permission from Nepal for use of its airspace, which it considered unnecessary because of its close relations with Nepal.

Reportedly, the king was furious to hear of the violation of Nepal’s airspace without regard for Nepal’s sovereign status and ordered his staff to devise a strategy to deal with the situation. The king was advised to seek defense equipment from China to protect Nepal’s airspace. He approved the purchase of military supplies from China, including—and this may just be a story—air-defense missiles. And, most likely, Nepal’s military alignment with China helped quicken the end of king’s direct rule and ushered in the democratic change 14 months later, in May of 1990, which limited king’s power to a ceremonial head of state.

The current decision by Nepal to conduct military exercises with China adds a new chapter in Nepal-China relations, with far-reaching consequences. Reportedly, the exercise is to be conducted on a limited scale, in northern region of the country. But, in reality, Nepal is more concerned about the defense of its southern border and so the exercise may also include some parts of Madhesh. It is unsurprising then that Nepal’s defense preparedness has startled India, more so because its border with Nepal is unprotected and could at some point provide an opening to China, however unlikely this possibility right now.

A larger concern is expressed by Madheshi leaders who tend to believe that Nepal’s defense posture is focused on its southern border, that Kathmandu is unheeding of the unsettled situation in Madhesh which may incite a region-wide unrest. Reportedly—and again, this isn’t verified—as much as 80 percent of military and police personnel under government command is stationed on the country’s southern border, which belies the government claim that it maintains friendly and trustful relations with India.

In this background, there is a possibility that China will look to exploit the opportunity to get deeply involved in Nepal’s domestic affairs. One possible scenario is the escalation of disturbances in Madhesh, with emotions still running high from last year’s trade blockade and slow progress on amending the constitution to revise or delete parts that Madheshis have objected to.

If the amendments do not move fast and, worse, the major demands of Madheshi leaders are scuttled—which is the line taken by former Prime Minister Khadga Prasad Oli—there could be a big challenge to government rule in Madhesh, a ‘colonized’ territory, a perception that is slowly spreading. A final possibility is that a supposedly peaceful and nonviolent struggle for Madheshi rights may descend into violence and bloodshed.

How would Nepal government respond? If violence spreads into many parts in Madhesh, the government may call in the army to support its beleaguered police force to quell the unrest and restore law and order. If this confrontation leads to massive disorder and civil war, it could have catastrophic consequences for Nepal as a nation, including the loss of its sovereignty and, in an extreme situation, slide of Madhesh territory into India if China comes to Nepal’s aid.

At this moment, Nepal’s effort to establish military cooperation with China is intended at seeking a balance between its two large neighbors and, in doing so, strengthening its relations with both. This is a defensible argument and good diplomacy but it assumes peace in the country and a hands-off policy of India in Nepal’s affairs. The reality, however, is that these two assumptions can’t be taken for granted, thereby creating a situation that challenges peaceful coexistence of all three countries involved.

A larger concern is that if Madheshi situation remains unstable and uncertain, Nepal’s misgivings about India’s interference, including intervention, will make it more and more dependent on China, for economic as well as military purposes. The size and frequency of military exercises planned for the next month will likely increase and that is not going to go unnoticed in India. Any semblance of Chinese presence in Madhesh—real or imagined—could trigger India’s intervention to at least protect Madhesh territory from occupation by the Chinese, while the Chinese government could be happy to limit its presence in Nepal in hill regions.

It is difficult to see how new military cooperation with China is a helpful strategy; more likely this will provoke India if it feels that Nepal hobnobbing with China is intended at making a hole in its regional defense umbrella. In the final analysis, it all depends on to what extent Nepal can accommodative Madheshi grievances and how much of a distance it keeps with China.

Ncell converts itself into public company
13 hours ago