Plastic-munching caterpillars could save the planet - if they don't destroy it first, new research reveals 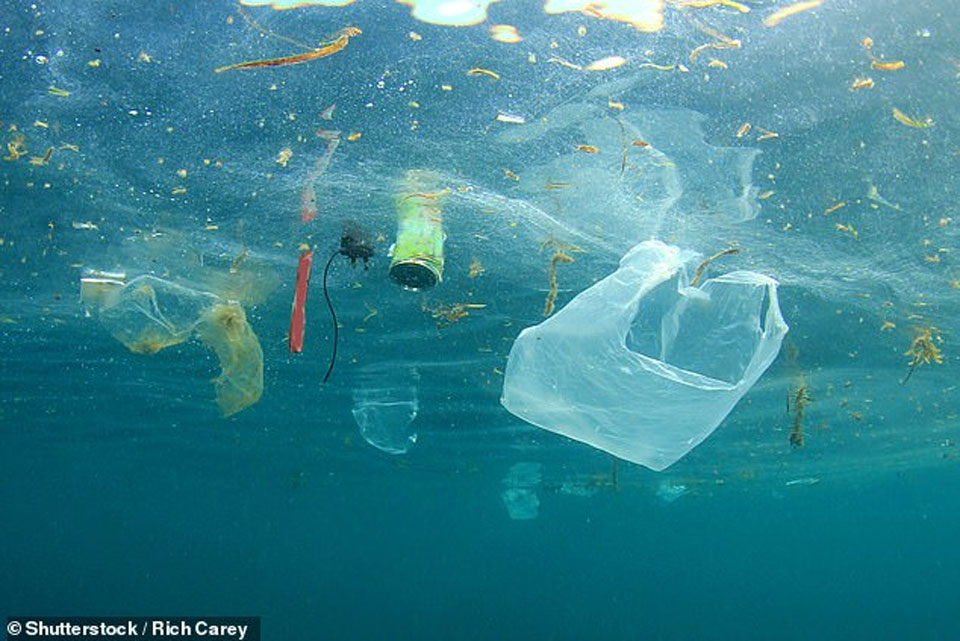 Experts at the Royal Botanic Gardens at Kew believe that new, plastic-consuming organisms may soon be helping to break down the world's six billion tons of plastic waste

Could Mother Nature provide a solution to the world's plastic pollution catastrophe?

Experts at the Royal Botanic Gardens at Kew believe that new, plastic-consuming organisms may soon be helping to break down the world's six billion tons of plastic waste.

They are pinning their hopes on a strain of fungus discovered by scientists working on a rubbish dump outside Islamabad, Pakistan, last year.

Aspergillus tubingensis produces a protein — an enzyme — that can actually break down even super-resilient plastics such as polyester polyurethane, fully digesting it within weeks.

The fungus was previously regarded as a plague on the food industry, appearing as a dark mould on stored fruit and cereals.

But the researchers at the World Agroforestry Centre announced last week that the fungus has evolved in such a way that it can now utilise polyurethane as a food source.

Dr Ilia Leitch, an expert in plant and fungal biology at Kew, said: 'We need to identify those genes [that produce the plastic-degrading enzyme] and then we can widen the use.

They could be put in marine fungi to help clear the plastic in the oceans.'

Katherine Willis, director of science at Kew, believes that such a plastic-eating fungus could be in use within five years because of the widespread interest from multi-national industrial companies in developing it.

We could certainly do with help in ridding ourselves of polyurethane waste. It is used to manufacture a vast array of objects, such as tyres, supermarket trolleys, glues and condoms, while polyurethane foam in soft furnishings is also a major toxic pollutant.

Roughly half of all our plastic products are thrown out within a year.

At current growth rates, there may be 12 billion metric tons of plastic — equivalent to the weight of 33,000 Empire State buildings — in landfills by 2050.

But the Pakistani fungus is not the only trick Mother Nature has to hand when it comes to plastic.

Due to their increasing exposure to plastic in the environment, bacteria and even caterpillars are evolving to do the same.

Earlier this year, British scientists revealed how they made an accidental chemical breakthrough while studying bacteria from Japanese rubbish dumps.

The microbes there had evolved to produce an enzyme capable of digesting a common plastic called polyethylene terephthalate (PET).

PET was patented in the Forties and is used in millions of tonnes of plastic bottles. It can persist for hundreds of years in the environment and pollutes large areas of the planet.

A team from Portsmouth University, led by structural biologist Professor John McGeehan, worked with scientists at the U.S. National Renewable Energy Laboratory to work out how the microbes transformed indigestible PET into breakfast, lunch and supper.

Using one of the world's most powerful X-ray machines — the Diamond Light Source in Oxfordshire which creates a ray-beam ten billion times brighter than the sun — they analysed the individual atoms making up the enzyme.

They found that its structure was very similar to that of an enzyme produced by some bacteria to break down cutin, a coating that plants grow to protect their cells from attack by pests.

When the team manipulated the enzyme's structure to investigate this connection, they inadvertently improved its ability to eat PET plastic, making it faster-acting and more powerful.

'It is a modest improvement — 20 per cent better,' Professor McGeehan says. 'But it's incredible because it tells us that the enzyme is not yet optimised. It gives us scope to make a super-fast [plastic-eating] enzyme.'

Caterpillars offer a similar hope. The waxworm, a type of moth caterpillar, has been found to consume plastic bags made from polyethylene — one of our toughest and most commonly used plastics.

The discovery was made by Federica Bertocchini, a Spanish embryologist who is also a bee keeper. In 2016, she found her hives had become infested with waxworms, an apiarist's worst nightmare. The waxworms devour the wax that bees use to build honeycombs.

Bertocchini picked out the pests and put them in a plastic bag while she cleaned out the hives. When she returned to the bag, she found it full of holes. The waxworms had eaten their way out.

Bertocchini collaborated with Professor Christopher Howe at Cambridge University's Department of Biochemistry to conduct a timed experiment whereby around 100 waxworms were exposed to a plastic bag from a UK supermarket.

Holes started to appear after just 40 minutes. After 12 hours, 92mg of plastic had been consumed.

That compares with the reduction rate of just 0.13mg a day from the Japanese bacteria.

The scientists believe that the caterpillars have an enzyme that can break down the chemical bonds in polyethylene because they share similarities to those in beeswax.

So could we use the enzyme to solve this form of plastic pollution effectively?

Professor John McGeehan at Portsmouth, who worked on the plastic-eating Japanese bacteria, says that by copying natural enzymes and then vastly boosting their capabilities, we could digest our way out of the unholy plastic mess we have created.

He hopes that such a super-fast mutant enzyme could be transplanted into bacteria that can survive temperatures above 70c — the point at which PET melts.

The bacteria could then be used cheaply in recycling facilities to digest vats of molten clear-plastic bottles, bags and so on, leaving a sludge (the waste products of the bacterial digestive process) composed of the plastic's component chemicals.

This could then be reconstituted to manufacture new plastics (currently, PET products can only be recycled into opaque fibres for clothing or carpets.)

Professor McGeehan goes further. Not only could the super-bacteria help to reduce the amount of new plastic being produced by boosting recycling of old material (some one million plastic bottles are currently sold each minute around the globe), they could also reduce our dependence on the oil used to manufacture plastics.

'It means we won't need to dig up any more oil and, fundamentally, it should reduce the amount of plastic in the environment,' he says.

The professor's team has already filed for a patent on its mutant enzyme.

Meanwhile, scientists are investigating other organisms that may have evolved to break down common plastics.

We know that Nature has rapidly developed ways of turning other man-made materials into food.

In 1975, Japanese scientists discovered a bacterium they named Nylonase that is able to digest the toxic by-products of nylon manufacture.

Since nylon was invented in 1935 none of the toxic by-products had existed previously.

However, over time bacteria exposed to these by-products evolved to be able to consume them. Now the same is happening with plastics.

But one very serious question remains. Even if Professor McGeehan and his colleagues can turn their discoveries into real-world technologies, rather than laboratory theories, we must think very carefully before unleashing them on the world.

Could new super-enzymes invade our everyday environment, breaking up and eating the vital plastic components in our cars, in our homes, in computers and in hospitals, for example?

It is a strange and alarming doomsday scenario, yet one that has become suddenly plausible.

Through laudable efforts to save our earth from the plague of plastic that engulfs us, we could find ourselves replacing one scientific nightmare with another at least as terrible.

There is, of course, an infinitely wiser alternative: we could simply wean our culture from its plastic addiction and instead use the stuff only when we really need it.

The Ocean Cleanup project sails out to sweep Pacific plastic

“If you leave the land that nurtured you, that fed you and that enabled you to become what you are... Read More...