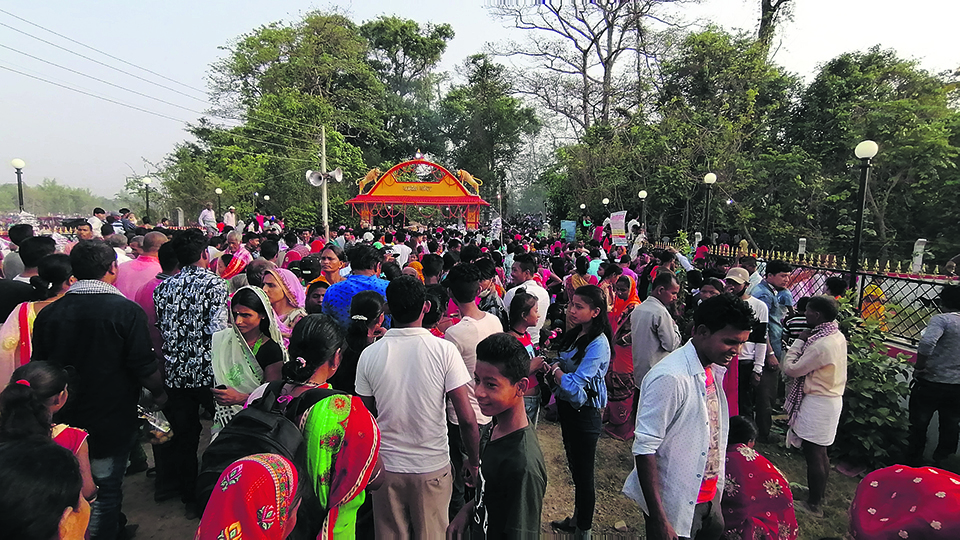 Pilgrims outside the Rajdevi Panchawati Temple of Lahan Municipality-15 on Saturday.

LAHAN, May 19: A pilgrim who fell unconscious while waiting in a queue to enter the Rajdevi Panchawati Temple of Lahan Municipality-15 on Saturday died on the way to the hospital.

The deceased has been identified as Balgopal Yadv, 40, of Sukhipur Municipality-2. Yadav first collapsed apparently due to the soaring temperature. He was rushed to a nearby hospital by police and the temple management committee but unfortunately died on the way, informed Deputy Superintendent of Police (DSP) Rajesh Thapa of the Area Police Office (APO), Lahan.

Not just him, but many other pilgrims fainted while waiting in the queue. The temple management committee rescued all of them and rushed them to local health posts for treatment.

"Thousands of pilgrims visited the temple to attend a fair," said Sunita Yadav of Lahan, adding, "The temple was overcrowded as the entry gate was made narrow by fencing."

According to her, as the crowd could not be managed properly, the pilgrims suffocated and kept falling unconscious. Even though the way to the temple was comparatively well managed than previous years, managing the high number of pilgrims was a challenge.
Animal sacrifice on Buddha Jayanti

The fair was organized in Rajdevi Panchawati Temple on the occasion Baishakh Shukla Purnima, which is also celebrated as Buddha Jayanti. Thousands of pilgrims reached the temple from various parts of India and Nepal to attend the fair. As the temple lies in a place dominated by the Tharu community, every year pilgrims offer animal sacrifice on the day of Baishakh Shukla Purnima.

The number of sacrifices here is second only to that of Gadhimai temple in Nepal,  which sees a bloodbath every five years. Pilgrims visiting the Lahan-based temple believe that god will forgive their sins, fulfill their wishes and cure their illnesses if they offer an animal sacrifice to goddess Rajdevi.

Tej Narayan Chaudhary, ward chief of Lahan-15, informed Republica that the number of pilgrims is increasing every year in the temple.

A large number of goats, ducks, and chicken among others are killed inside the temple due to various beliefs and superstitions.

The elderly people in the locality claim that the temple came into existence more than a century ago.

Famous Bollywood musician Wajid Khan has passed away. He died Sunday night at the age of 42. The Sajid-Wajid duo,... Read More...

DHADING, May 19: The death toll in Trishuli bus plunge has climbed to six. ... Read More...

Rs 5,000 to family of woman who died during abortion